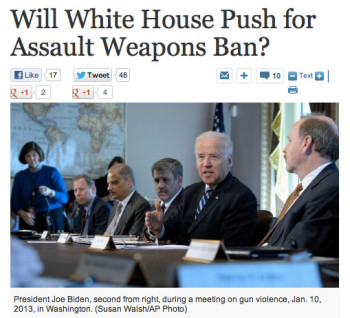 “A Senior administration official” and “some in the media” were key sources ABC News used to both undermine and defend the much publicized recommendations soon to be made by the federal task force on curbing guns, which Vice President Joe Biden will place on Obama’s desk this coming Tuesday.

iMediaEthics notes that using anonymous sources to attack or defend a policy initiative is second cousin to the ethical “no no” of the media attacking individuals with unnamed sources.

In its short (354-word) Jan. 11 story, “Will White House Push for Assault Weapons Ban?,” ABC News referenced unnamed sources without one word of explanation as to why they were granted anonymity.

And as if to add dark comic relief, the caption below the photo of Joe Biden refers to him as the President.

So, will Vice President Joe Biden push to ban assault rifles? In the fourth paragraph, mysterious sources ABC News refers to as “Some in the media” are quoted as saying they “have taken Biden’s silence at these meetings to mean the White House is moving away from pushing an assault weapons ban like the one he was a principal author of in 1994, and that Sen. Dianne Feinstein of California is pushing now.”

Who are these unnamed media people? How many? Why aren’t they named? You get the idea.  ABC News has unfairly used this elusive group to introduce the argument. But there is no way for readers or viewers to know how serious this sourcing is, either by its authority or content, when the author makes no attempt to explain who “Some in the media” actually are.

In the paragraph that follows, ABC News quotes an anonymous defender, the other side of the fence creating dueling anonymous sourcing for their policy fight. They quote more unnamed sources, “White House officials,” as rejecting the anonymously sourced idea that Biden and his federal task force “were retreating on an assault weapons ban.”

It also quotes a “senior administration official” as saying “‘It is absolutely not true’ that the White House has decided not to push for a ban.”

We are contacting ABC News to ask how they justify using anonymous sourcing for both sides of the fence without explanation to their viewers/readers.

At least one ABC News commenter noted the caption holler that bestowed the title of president upon Vice President Joe Biden.

Newcountryman posted: “President Biden….to [sic] horrendous to even contemplate. A few days ago ABC described Eric Cantor as the Senate Majority leader. What the heck is going on at ABC?”

1. The caption below the photo of Joe Biden refers to him as the “President.” Will you correct this error?

2. ABC News references unnamed sources to both challenge and support the president yet there is no explanation as to why they were granted anonymity? What is ABC News’ policy on quoting anonymous sources?
Does this particular usage comply with your policy?

She quickly responded. Townsend, however, only provided an answer about the caption error.  She wrote: ” If there’s an error in the caption, we’ll correct it promptly.”

Indeed, the caption now reads: “Vice President Joe Biden, second from right, during a meeting on gun violence, Jan. 10, 2013, in Washington. (Susan Walsh/AP Photo).”  But there is no transparent correction admitting an error contrary to best journalism ethics practices.

ABC News deserves positive feedback for their speed but fails on transparency.

iMediaEthics plans to approach ABC News standards and practices office about their policies on the use of anonymous sources and their handling of corrections. We will ask why factual errors can be invisibly changed in articles without ABC Newsroom acknowledgement or apology.