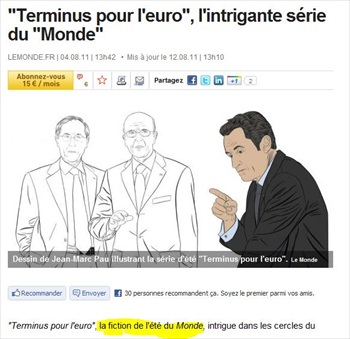 Biedermann noted that the retraction was issued 12 hours after the story was released on AFP’s French wire. “We explained to our clients that it established an erroneous link between Le Monde’s fiction, a Mail on Sunday’s article and Société Générale’sstock market drop,” Biedermann wrote.  Biedermann noted that the AFP “asked our web clients to withdraw the story from their site” as well.

According to the New  York Times, it has been suggested on Twitter and on the radio that Le Monde somehow influenced the “mysterious sell-off in French bank stocks last week.”

Le Monde had published “a fictional series of articles,” titled “End of the Line for the Euro, that the Times described as having “looked at how a collapse of the single currency might play out, against the backdrop of French presidential elections next year.”  The stories used the names of “real banks, like Société Générale, whose shares plunged 15 percent last Wednesday, prompting the bank to deny speculation that it was in financial trouble.”

Le Monde’s Erik Izraelewicz issued a July 13 “front-page editorial” last weekend denying that Le Monde was responsible for the market news. “The reality is that our fiction had nothing to do with this crazy rumor,” he wrote. Izraelewicz noted that its stories were “very clearly marked” as “a fiction that takes place in 2012.”

He also commended the AFP for retracting its report and The Mail on Sunday for apologizing to the banks after a report stating negative claims about them.  Izraelewicz noted that “none of [the Mail’s] journalists and none of its sources had been aware” of Le Monde’s stories,

The Mail apologized to Société Générale (see here) for its Aug. 7 story that stated the bank and another bank, Unicredit, are “on the brink of disaster” and “in a ‘perilous’ state” respectively,” according to the New York Times.

“We now accept that this was not true and we unreservedly apologise to Société Générale for any embarrassment caused,” the Aug. 9 apology stated.