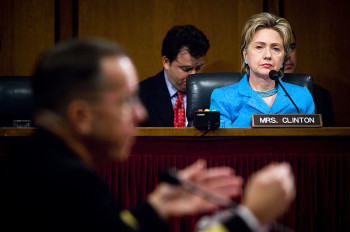 Problems with the story included:

1. Who was the target of a potential investigation? “It wasn’t really Mrs. Clinton directly who was the focus of the request for an investigation. It was more general: whether government information was handled improperly in connection with her use of a personal email account,” according to Sullivan.

2. Was it a criminal inquiry? The Times first reported with the “startling characterization of a ‘criminal inquiry'” but changed it later to a “‘security referral,'” Sullivan wrote. That was inaccurate because the Department of Justice later said, “The Department has received a referral related to the potential compromise of classified information. It is not a criminal referral,” Politico’s Dylan Byers’ coverage of changes said.

3. The Times said “two inspectors general sought an inquiry” but only one did, Byers wrote.

4. Times readers didn’t get transparency from the newspaper on the errors and changes. “The inaccuracies and changes in the story were handled as they came along, with little explanation to readers, other than routine corrections,” Sullivan reported.

5. “The evolving story, which began to include a new development, simply replaced the older version,” effectively erasing the Times‘ original story claims indicating a criminal inquiry into Hillary Clinton, which was ultimately inaccurate.

Corrections on the article now read:

Correction: July 25, 2015
An article and a headline in some editions on Friday about a request to the Justice Department for an investigation regarding Hillary Clinton’s personal email account while she was secretary of state misstated the nature of the request, using information from senior government officials. It addressed the potential compromise of classified information in connection with that email account. It did not specifically request an investigation into Mrs. Clinton.

Correction: July 26, 2015
An article in some editions on Friday about a request to the Justice Department for an investigation regarding Hillary Clinton’s personal email account while she was secretary of state referred incorrectly, using information from senior government officials, to the request. It was a “security referral,” pertaining to possible mishandling of classified information, officials said, not a “criminal referral.”

Sullivan asked editor Matt Purdy how the Times got it wrong to begin with. The Times‘ sources for the original claims were “multiple, reliable, highly placed sources,” he said, but they were wrong. “We got it wrong because our very  good sources had it wrong,” he told Sullivan. Purdy added that the Times never saw the actual referral for a criminal inquiry into e-mails, but said it was typical. He did not explain why these “good sources” were allowed to remain anonymous, leading some to speculate that this was a political hit job by Clinton’s enemies.

“When you add together the lack of accountability that comes with anonymous sources, along with no ability to examine the referral itself, and then mix in the ever-faster pace of competitive reporting for the web, you’ve got a mistake waiting to happen,” Sullivan argued. “Or , this case, several mistakes.”

Sullivan advocated for accuracy over speed and called for greater transparency from the paper. “Losing the story to another news outlet would have been a far, far better outcome than publishing an unfair story and damaging the Times‘ reputation for accuracy,” she wrote. “What’s more, when mistakes inevitably happen, The Times needs to be more transparent with readers about what is  going on. Just revising the story, and figuring out the corrections later, doesn’t cut it.”

Further, The Washington Post‘s Erik Wemple reported that the House oversight committee’s Democratic spokesperson said the Times “did not check with us before running its story.”

New York Times executive editor Dean Baquet acknowledged the newspaper failed to provide transparency to readers throughout the process of changing the story. Despite the errors, he said of the reporters that he wasn’t “sure what they could have done differently on” the story since it had anonymous sources in law enforcement confirming the story.