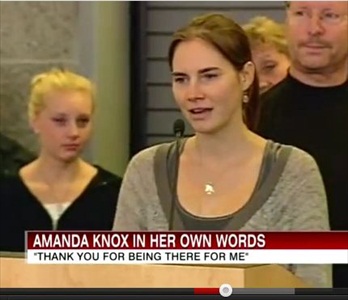 According to The New York Post, that ABC News producer Nikki Battiste,  “was dubbed ‘the baby sitter’ by rival networks for ‘coddling’ the girls, taking them shopping and to cafes” and both CBS and NBC producers reportedly “offered their help to the family.”

The claims of babysitting and hotel room stays are of interest because the networks all have recently commented on checkbook journalism — when news outlets exchange money or in-kind gifts in exchange for actual or anticipated coverage, interviews.

In July 2011, ABC News announced it would only pay licensing fees as an exception to the rule, for rare circumstances.  In past years, ABC News reportedly had paid licensing fees to Casey Anthony and her family; the Chilean miners; Jaycee Dugard, the woman behind the fake story that she gave Botox injections to her 8-year-old daughter; and one of the women who had an online relationship with former Rep. Anthony Weiner.  NBC News also reportedly paid the Chilean miners, David Goldman, and others.

According to the Post, NBC denied babysitting or getting Knox family members hotel rooms.  CBS stated “At no time did any member of Amanda Knox’s family occupy CBS News hotel rooms in Perugia,” and ABC declined comment.

Knox rejected that the producers took the daughters “shopping and to cafes,” but explained that producers did accompany the family on their own shopping.

“CBS News did not grant permission to any member of Amanda Knox’s family to use our hotel room in Perugia. Producer Sabina Castelfranco was asked if her room was available. Castelfranco declined the request and checked out of the hotel.”