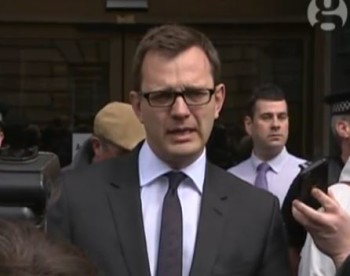 Andy Coulson speaking today after his acquittal was announced. (Via Guardian)

Andy Coulson, a former News of the World editor and former communications director for UK prime minister David Cameron, was acquitted of perjury charges stemming from a 2010 phone hacking case in Scotland.

Coulson had pleaded not guilty to the three perjury charges filed against him last year.  The charges concerned Coulson’s 2010 testimony in a perjury trial against Scottish politician Tommy Sheridan. Sheridan was found guilty.

Sheridan had a few years earlier sued News of the World for defamation. Coulson’s 2014-2015 perjury charges accused him of lying during his testimony in 2010.

The judge accepted Coulson’s argument that any alleged perjury had to be relevant to the trial back in 2010 and that Coulson’s 2010 testimony wasn’t, the BBC reported.

“Not every lie amounts to perjury,” the judge said.  He added: “I consider that the false evidence alleged in this indictment was not relevant evidence at the original trial and the charge of perjury in the indictment is irrelevant.”

The judge, Judge Lord Burns, explained, according to the Press Association:

“To prove the charge against Mr Coulson, the Crown needed to prove that the allegedly false evidence given by Mr Coulson was relevant to the issues which arose in Mr Sheridan’s trial for perjury or Mr Coulson’s credibility in the important evidence he gave at that trial.

“After two days of legal submissions last week and having considered the matter, I decided that the Crown had not led sufficient evidence to satisfy me that the allegedly false evidence was relevant to proof of the charge in Mr Sheridan’s trial or Mr Coulson’s credibility at that trial.”

A Crown Office spokesperson told the BBC that “proceedings” against Coulson related to the Sheridan trial are officially over.

Coulson said he was “delighted” by the ruling. He went on: “This prosecution was always wrong. I didn’t lie, and the prosecution in my view was a gross waste of public money.

“I’m just delighted that after four pretty testing years, that my family and myself have finally had a good day.”

See his statement below.

Coulson was convicted of phone hacking last year and sentenced to 18 months in jail.