Ann Dunwoody may be 4 Star General ; But Army does cover girl makeover 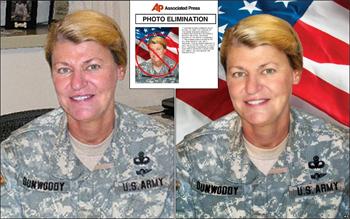 US Army General Ann Dunwoody is given a Photoshop makeover by the US military. AP Photos sees the matter as a breach of news photo ethics. Fashion magazine covers do re-touching...is this the new US Army?

You may remember our last story on the US military’s use of Photoshop. They had given AP Photos altered an identification photo for a deceased soldier and people noticed. AP Photos was embarrassed and had to pull the photo from their archives. Well, BBC reported the Army did it again. Now AP Photos have “suspended” using US Dept. of Defense images. The military claims they have not violated their own policy. Photo retouching is fine.  “We’re not misrepresenting her,” Col Abbott told BBC. “The image is still clearly Gen Dunwoody.” Sure, a little make up and skin smoothing in Photoshop helps a busy General who has no time to find the right blush and lip gloss to match those washed-out camoflage greens !

BBC reported,  ” AP says that adjusting photos and other imagery, even for aesthetic reasons, damages the credibility of the information distributed by the military to news organizations and the public.

” ‘ For us, there’s a zero-tolerance policy of adding or subtracting actual content from an image,’ said Santiago Lyon, AP’s director of photography.

BBC asked who released the photo or did the Photoshop makeover for the General . Col Abbott said she did not know.