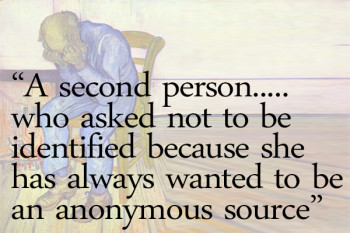 The New York Times stuck its tongue in its cheek this week when it granted anonymity to a source who always wanted to be quoted as an anonymous source.

The Feb. 24 Times article, “Commodes, if Not Commutes, Have Improved at Port Authority Bus Terminal” began with a light-hearted reference to comedian John Oliver, who had mocked the Port Authority as “the single worst place on Earth” before reporting that the Port Authority has undertaken a “restroom rehabilitation project.”

The Times asked two women for their takes on the restrooms, naming the first and allowing anonymity for the second. “A second person who checked out the women’s restroom — and who asked not to be identified because she has always wanted to be an anonymous source — reported her findings by email,” the Times stated.

Times public editor Sullivan, who began tracking the newspaper’s dependance on anonymous sources by creating an Anonywatch feature, took the odd anonymous source request in stride, given the “light touch” of the article and its topic.

She wrote in her blog that, “I’d never want to stand in the way of someone fulfilling her ambitions, so I’m inclined to laugh — although it is a bitter laugh — about the most recent example of gratuitous anonymous quotation in The Times.”

Times standards editor Philip B. Corbett agreed the anonymous source line “was just intended as a bit of self-aware humor,” in an e-mail to Sullivan.

He went on, “It certainly doesn’t suggest that we don’t take sourcing issues seriously. But after all, this was a bathroom story.”