Another News of the World Editor in Phone Hacking Scandal?

Another News of the World Editor in Phone Hacking Scandal? Ian Edmondson accused 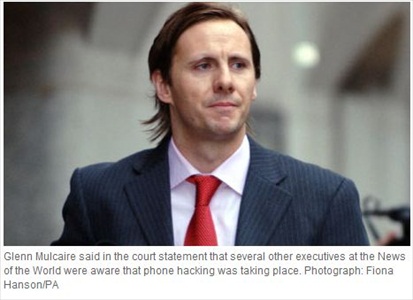 Glenn Mulcaire, pictured above, recently named another News of the World editor in the accusations of phone hacking. (Credit: Guardian, Fiona Hanson/PA)

In the latest turn of events with the accusations of a “culture” of phone hacking at UK newspaper News of the World, Glenn Mulcaire, described as “the private detective at the centre of the case,” claimed that the newspaper’s news chief “commissioned” him to hack into phone messages, The Guardian reported.

Mulcaire reportedly issued his claim in “a statement to the high court” Jan. 17.  He stated that “Ian Edmondson, the paper’s assistant editor (news) asked him to hack into voicemail messages left on a mobile phone belonging to Sky Andrew, a football agent.”

That “admission” is key because it “contradicts the paper’s repeated claim that only a single journalist — the former royal editor Clive Goodman — knew about” the phone hacking, The Guardian explained.

According to The Guardian, Andrew has filed a lawsuit against News of the World claiming “breach of privacy.”  Edmondson recently was suspended from the newspaper pending an internal investigation.  The Guardian detailed that the investigation includes the  newspaper’s “trawling through [Mulcaire’s] e-mails,” an interview and the seizing of his computer.

Further, The Guardian indicated that News of the World’s publisher is paying Mulcaire’s “legal fees.”

Since the News of the World’s alleged phone hacking was brought to the forefront with a New York Times expose last September, several lawsuits have been filed against the UK newspaper.

As iMediaEthics previously reported, the actress Sienna Miller recently filed a suit against the newspaper and in the wake of that suit, the newspaper suspended senior editor Ian Edmondson during its internal investigation into the claims.

The Guardian noted that “former England footballer” Paul Gascoigne’s lawyer stated that Gascoigne intends to file a suit against the newspaper as well.  Gascoigne “has been fighting drink and drug problems for years and been in and out of rehabilitation clinics.”  His lawyer, Gerald Shamash, reportedly stated that Gascoigne’s “recovery had been hindered because of the stress of believing that his phone had been hacked.”

According to The Guardian, “four people have settled claims against the newspaper before they reached court.”

Andy Coulson, who resigned from his post as News of the World editor amid the scandal in 2007, is currently the director of communications for the UK prime minister.

Prime Minister David Cameron has “refused to deny allegations” that Coulson offered to resign his post given the new investigation into the phone hacking charges, Politics.co.uk reported.

The Independent’s Matthew Norman commented sarcastically on Coulson’s alleged attempted resignations, calling Coulson “the first person in history to offer to resign twice for something of which he knew nothing.”

Another News of the World Editor in Phone Hacking Scandal? Ian Edmondson accused