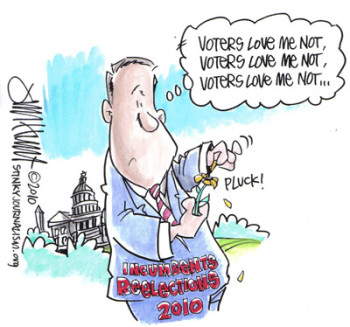 Are Americans anti-incumbent this year? In the famous words of an infamous resident of Wasilla, Alaska, “you betcha!” Or so we are told by pollsters, who tell us they are currently measuring anti-incumbent sentiment that is the highest “ever” measured.

(“Ever” in this case is really less than 20 years, because that’s when the questions measuring incumbent sentiment were first asked. That’s not trivial, but it’s a far cry from “ever” in U.S. history.)

A Google search of “anti-incumbent mood 2010” yielded over 200,000 hits, suggesting it is indeed a dominant theme for this election, as suggested by Time magazine writer, Adam Sorensen.

But beware the hype!

Different polls give vastly different pictures about the anti-incumbency “fever” that is spreading among U.S. voters.

Support for Reelection of Congressional Representative

ABC News’ Gary Langer presents perhaps the most dramatic picture of public frustration, describing poll results (with the Washington Post) in words such as “pent-up discontent well above the boiling point,” data that suggest “a political pigeon shoot” and “incumbents beware,” all contributing to a “hot political summer.” Wow! Sounds really, really bad!

The comments are a reflection of the ABC/WP poll results in early June, showing 60 percent of voters who oppose the re-election of their Congressional representative, with only 29 percent who support re-election.

By contrast, Gallup, which is no less prone to interesting headlines (suggesting voters prefer newcomers over incumbents by a two-to-one margin), nevertheless presents a substantially different picture. According to their latest poll numbers (with USA Today), only 40 percent of voters oppose the re-election of their own Congressional representatives – a 20-point difference from the ABC/WP poll conducted in roughly the same time period. And 50 percent of Gallup’s respondents support reelection, compared with just 29 percent in the ABC/WP poll.

The ABC/WP poll and USA Today/Gallup poll have dramatically different results regarding re-election of current Congress members because of the way pollsters framed the question.

Why the big difference between the polls? Gallup asks a straightforward question – whether the respondent’s Congressional representative deserves re-election or not. ABC and the Post, on the other hand, ask a question that is double barreled: “Right now, are you inclined to vote to reelect your representative in Congress in the next election or are you inclined to look around for someone else to vote for?” (Emphasis added).

A more valid question would have been phrased: “Are you inclined to vote to reelect your representative in Congress in the next election, or not?”  (Alternatively, the second option, instead of being “or not,” could have been: “Or are you not inclined to reelect your representative in the next election?”) The “looking around” option inflates the percentage of people who appear to be anti-incumbent, when a good proportion of them are probably just unsure at this stage of the election how they’ll vote.

But what about Gallup’s discovery that a majority of voters (60 percent) would prefer to vote for “a candidate who has never been in office” over “a candidate who has been in Congress” (32 percent)? That sounds really, really bad – but there is no trend on this question, Gallup asking that for the first time this past May. So, it’s difficult to compare with previous elections.

The results are, however, almost identical to another Gallup question, which has been asked of voters periodically over the past 18 years: “Do most members of Congress deserve reelection?” The most recent poll found 63 percent of voters saying no, 32 percent yes. Thus, the new question (about preferring a newcomer) appears to measure pretty much the same sentiment as the older, general question about Congress. And that leads to the other anti-incumbent measure often reported.

Part of the hype about anti-incumbency comes from polls that ask whether voters believe that “most members of Congress” should be reelected. Here the percentages saying yes are far smaller than the percentages of voters who tell pollsters they support the reelection of their own Congressional representative.  Still, there are extreme differences among pollsters on this question as well.

While the USA Today/Gallup poll cited earlier (two paragraphs ago) showed a 2-to-1 margin against reelection of “most” members of Congress (63 percent opposed to 32 percent in favor), an innovative CBS News question was able to discover a margin of 9-to-1 opposition (82 percent opposed to just 9 percent in favor)! Borrowing the hype from ABC’s Gary Langer, I’d have to say those figures show a public beyond frustration and into rage!

The different results from similarly themed questions is likely because of the way the questions were framed to poll takers.

But are the CBS figures really an accurate gauge of voter sentiment? I think not. Like the ABC/WP poll, the CBS poll question is double-barreled: “Do you think most members of Congress have done a good enough job to deserve reelection, or do you think it’s time to give new people a chance?”

This question presents a second option that is not the opposite of the first option. The second option could include people who feel giving new people a chance is more important that reelecting incumbents, even if they have done a good job (and deserve reelection).

To make the CBS question a more valid measure, the second option should have been worded, “Do you think most members of Congress have done a good enough job to deserve reelection, or not?” But the second option of CBS’s question, which introduces the idea of opening up the race so new people can have a chance, tends to over-measure the anti-incumbent mood, when many voters giving that response may simply be trying to be fair.

What Matters? The Anti-Incumbent Mood?

Last February, when the CNN anti-incumbent figures were very similar to the numbers recently reported by Gallup, the story on the network’s website suggested, “This is not a good year to be an incumbent, regardless of which party you belong to. Voters seem equally angry at both Republicans and Democrats this year.”

What does it mean by “not a good year?” Does that mean it would be better to be a challenger this year than an incumbent? Not according to one statistical guru. John Sides’ “The Monkey Cage” estimates that, given the recent results of Gallup’s polls (which are very similar to CNN’s results), the re-election rate for incumbents will be “only” 87 percent! So, who would you rather be – the challenger or the incumbent?

It is almost a surety that Republicans will gain seats in the U.S. House of Representatives, as every “out” party has done since the middle of the 19th Century (with three exceptions). And it’s probably about 50-50 that the Republicans/Democrats will win majority control.

But let’s keep a reasonable view of the national mood. All in all, incumbents are probably at least six times more likely to win in the 2010 House election than are the challengers – no matter what the polls say about “anti-incumbent fever.”