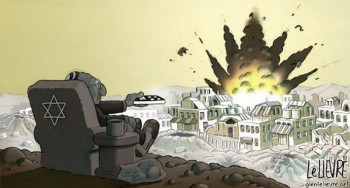 The Sydney Morning Herald retracted and said it was “wrong” to publish a July 26 cartoon about Gaza that has been called racist.

In an August 3 editorial, the Sydney Morning Herald admitted the cartoon “invoked an inappropriate element of religion, rather than nationhood, and made a serious error of judgment.”

The cartoon by Glen Le Lievre depicted “an elderly man, with a large nose, sitting alone, with a remote control device in his hand, overseeing explosions in Gaza,” according to the newspaper.  His armchair had a Star of David on it, “and the man was wearing a kippah, a religious skullcap.”

One such photo that shows that is the below AFP/Getty Images picture, tracked down by the Daily Mail.

Another photo was published by UPI/Landov/Barcroft Media, via the Guardian.

The Sydney Morning Herald said it originally denied that Le Lievre intended “racial vilification,” but now understands the cartoon wasn’t acceptable. “It was wrong to publish the cartoon in its original form,” the newspaper’s editors wrote. “We apologise unreservedly for this lapse, and the anguish and distress that has been caused.”

The newspaper’s editor Darren Goodsir told the Guardian Australia that he decided to apologize “after a long 10 days of serious thinking, and reflection.”

The New South Wales Jewish Board of Deputies complained to the Herald about the cartoon.

“In our view this is racial vilification, not only in the sense of offending, insulting, humiliating and intimidating Jews as a group, but also in the sense of inciting third parties to hatred of Jews,” Miller wrote, according to Israeli newspaper Haaretz.

Likewise, the Anti-Defamation Commission of the B’nai B’rith’s chair Dvir Abramovich complained the article is like “venomous propaganda” of the Nazis, Haaretz reported.

“The cartoon portrays not just Israelis, but all Jews, as heartless, cold-blooded murderers.”

The cartoon accompanied an opinion column by Mike Carlton. Carlton also received criticism for his article, “Israel’s rank and rotten fruit is being called fascism.”

“Not only were we treated to baseless accusations of ‘genocide’ and ‘ethnic cleansing’ on Israel’s part, but then there was a subtle shift. These were crimes being committed by ‘a people with a proud liberal tradition of scholarship and culture, who hold the Warsaw Ghetto and the six million dead of the Holocaust at the centre of their race memory.’

“This column was no longer about a country, this was about a people and a race – a people and a race who should know better because of what they themselves went through. In short, you Jews are the same as the Nazis, worse perhaps because you choose to ignore the lessons of your own history.”

Carlton stood by his column and wrote about the criticism on Twitter.

Golly. I think I’ve been emailed by half the Jews in Australia today. The racism and bigotry of some of them is quite startling.

Reliably hear that the Israel/Likud lobby is asking prominent Australians to sign a letter condemning my “anti-Semitic” column in the SMH.
— Mike Carlton (@MikeCarlton01) July 28, 2014

Cracked 700 emails about my column today. 80% favourable. 10% hysterics about Nazi scum, Arab pigs. There’s a few Jewish racists out there.

And still they come: Herr Carlton, you are an anti semitic jew hater lower than a snakes belly, oxygen thief,vulgar excuse for a human being
— Mike Carlton (@MikeCarlton01) July 27, 2014

“The paper’s requested I make no further comment on the drawing,” he told iMediaEthics.

UPDATE: 8/11/2014 5:10 PM EST Sydney Morning Herald editor Goodsir pointed us to the paper’s editorial as explaining the issues around the cartoon.