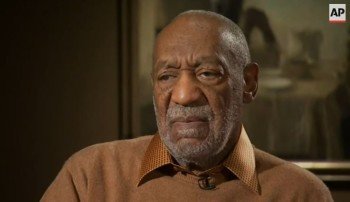 A screenshot from the interview (Credit: AP, screenshot)

Last week, the Associated Press published a video clip from an interview with Bill Cosby in which Cosby asked the AP not to publish its question about the rape claims against him and his lack of response.

Yesterday, AP entertainment reporter Brett Zongker defended the release of the video when asked about the ethics of doing so by CNN Reliable Sources host Brian Stelter, Mediaite reported.

Zongker told Stelter Nov. 23, “Nobody ever actually said this interview has ended now. Nobody said ‘let’s turn off the camera’. The conversation continued and the camera kept rolling and the microphones were on…” Stelter said he agreed that it was “fair game” and “on the record” since there was no off-the-record agreement and the recording devices were still running.

The AP said that because of the recent allegations, the wire service decided to release the unseen portion of the interview of Bill Cosby and his wife, which focused on art he loaned to the Smithsonian Institution.

“I have to ask” about the allegations, the AP reporter says to Cosby, who responded “No, no, we don’t answer that.” When asked again for comment, Cosby says “there’s no response.” And, a third time when asked about whether people should believe the claims, he said “there is no comment about that. And I’ll tell you why. I think you were told I don’t want to compromise your integrity, but we don’t, I don’t talk about it.”

Later, when “the camera was still running” and the Cosbys were wearing microphones, Cosby said “can I get something from you, that none of that will be shown.” The AP reporter said “I can’t promise that myself but you didn’t say anything.”

Someone off camera said they didn’t think there was any value.

The AP reporter said he would talk to his editors, and added that he was asked by his supervisors to ask.

Cosby said, “I think if you want to consider yourself to be serious, that it will not appear anywhere…and we thought by the way because it was AP that it wouldn’t be necessary to go over that question with you..Just tell your boss the reason why we didn’t say that up front was that we thought because the AP had the integrity to not ask.”

Cosby also told a person off camera to contact the reporter’s editor “immediately.”

The AP voiceover noted the exchange was “on-record” and “the AP made no agreement to avoid questions about the allegations or to withhold publishing any of his comments at any time.”

See the interview below: