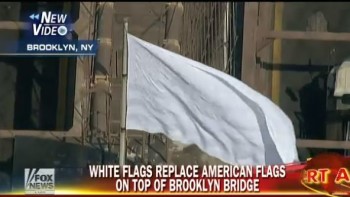 Two white flags were put on the top of the Brooklyn Bridge this week (Credit: Fox News, screenshot)

Both the Associated Press and New York Daily News were tricked by a parody account claiming it was responsible for putting two white flags atop the Brooklyn Bridge.

Two white flags were raised on top of the bridge in the middle of the night July 22 in place of the two American flags normally found there. On July 24, police said they had suspects, My Fox NY reported.

The Bike Lobby had tweeted July 22 that it was behind the flag stunt.

Earlier today we hoisted two white flags to signal our complete surrender of the Brooklyn Bridge bicycle path to pedestrians.

The Bike Lobby Twitter account told the Washington Post‘s Erik Wemple via e-mail that this is the first time a news outlet was duped by its tweets. “We’ve taken credit for all manner of things, from the Moon Landing to installing an android version of Janette Sadik-Khan in City Hall, and somehow people were able to get the joke,” a representative of the Twitter account wrote.

Bike Lobby has tweeted numerous times about the outlets that fell for its tweet.

We implore “journalists” asking for comment to A) read our profile B) read more than one of our tweets and C) Google “Dorothy Rabinowitz.”
— Bike Lobby (@BicycleLobby) July 22, 2014

Stop us if you’ve heard this one before. How many Daily News reporters does it take to not fact-check a story?
— Bike Lobby (@BicycleLobby) July 22, 2014

If you believe we’re for real, we have a bridge in Brooklyn we’d like to sell you.

The account also tweeted a screenshot of the Daily News’ article. A link to the Daily News article shows the article has removed any reference to the Bike Lobby group without explanation or correction.

Stick a front fork in us, everybody. Our work here is done. @AP pic.twitter.com/ndEVkdzxZq
— Bike Lobby (@BicycleLobby) July 22, 2014

The AP did acknowledge error in a statement to the Washington Post‘s Erik Wemple.

“The Associated Press has withdrawn its story about bike path advocates taking responsibility for the appearance of two mysterious white flags on the Brooklyn Bridge. The claim of responsibility has not been verified. A corrected version will be published imminently.”