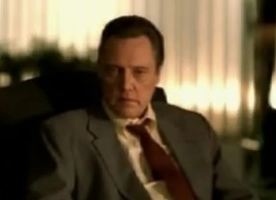 The Associated Press reported that it had corrected its Nov. 18 story that reported quotes attributed to Christopher Walken. Walken’s comments addressed the death of actress Natalie Wood. “Walken was sharing a yacht with Wood and her husband, actor Robert Wagner, when the actress drowned on Nov. 29, 1981,” the AP noted, and the investigation into Wood’s death was recently re-opened.

The fake comments attributed to Walken said that they had been drinking that night and he heard shouting.

The comments weren’t made by Walken, but were made by a radio producer, Marc Sterne, impersonating Walken as part of a weekly segment. Sterne pretended to be Walken during a program on Washington D.C. radio station ESPN 980 (the station for which he works).  According to the AP, Sterne impersonates Walken every week on the program “for a humorous segment.”  According to TBD, Sterne typically comments on fantasy football.

Sterne is quoted as telling TBD that “I didn’t mean any offense by it, and I’m very sorry if anyone was offended. I’m also very embarrassed for AP, that they thought it was the real thing.”

The AP issued two correction statements about the quotes. At first, the AP said, according to TBD, that

“The story quoted Christopher Walken telling Washington, D.C. sports talk radio station ESPN980 about his recollections from the night that Wood died. The station now says that it was a hoax involving a station employee who was impersonating Walken.”

Then, the AP said:

“The story mistakenly quoted Christopher Walken as telling Washington, D.C. sports talk radio station ESPN980 about his recollections from the night that Wood died. An Associated Press reporter mistook what was actually a station employee’s impersonation of Walken as a real interview.”

The Washington Post reported that ESPN 980 program director Chuck Sapienza criticized the AP’s handling of the retraction and calling it a hoax.  “No one [from AP] called us to see if it was real, and then they call it a hoax. A hoax makes it sound like it’s our fault. We’ve been doing this [impersonation] for two years. They’re taking no responsibility for shoddy journalism.”  The AP reported that Sapienza defended the Walken impersonation because “it’s not like we’re trying to fool anybody.” Sapienza noted that “We say it’s the person on the air but we never believe that someone actually thinks the person’s actually there.”

As such, according to the Washington Post, the AP changed its correction clarifying it wasn’t a hoax “After the station complained.”

The graphs in question — still published on AL.com  — are:

“Walken said on Friday that he went to bed on the yacht and awoke to learn that she had died. He told Washington, D.C. sports talk radio station ESPN980 that there was drinking and shouting on the boat and that he never heard anything until after Wood was discovered missing. ‘We had a lot to drink that night,’ Walken said. ‘There was Sambuca. There was shouting. And then there was tragedy. And that’s all I can remember. And quite frankly all my attorney right now would want me to say.'”

Yahoo News also still has published the following (with the byline of the AP’s Anthony McCartney):

“LOS ANGELES (AP) — Actor Christopher Walken says he went to bed on a yacht he was on with actress Natalie Wood and Robert Wagner 30 years ago and awoke to learn that she had died.

“Walken tells Washington, D.C. sports talk radio station ESPN980 on Friday that there was drinking and shouting on the boat and that then ‘there was tragedy.'”

The Hattiesburg American also has the phony quotes published and the story attributed to McCartney.

StinkyJournalism wrote to ESPN 980 to see if it has any further comment regarding this incident and will update with any response.