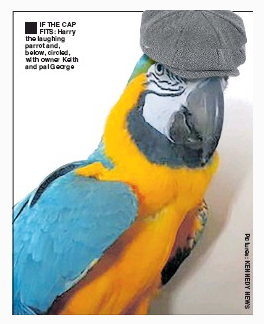 The Daily Star image of a parrot with a flat cap (Credit: Daily Star via Press Reader)

Is it OK to call a parrot “pain-loving” and Photoshop it wearing a hat?

The UK press regulator the Independent Press Standards Organisation ruled it was in the case of a February Daily Star article.

The article, “Beaky Blinders,” reported on a parrot that laughed at one of its owners for stubbing a toe, quoted one of the owners saying the parrot had its “forever home” with him, and included a doctored photo of the parrot wearing a flat cap. The headline and image invokes the British crime TV show Peaky Blinders.

A parrot charity organization called All Star Parrots, complained about the article to IPSO, saying the article was inaccurate and that it was upset the Star referred to the parrot as “pain-loving.”

According to IPSO, All Star Parrots claimed the parrot was only temporarily living with the couple in question and wasn’t permanently living with the couple. They also denied the owner talked to the Star and claimed parrots don’t understand pain so it wasn’t fair to call the parrot “pain-loving.” Further, the organization was upset about the Photoshopped image, saying it compared the parrot to a “psychotic television character.”

The charity also thought some of the information came from a private Facebook group; the Star denied that. Nonetheless, the Star and IPSO noted the journalist was part of the Facebook group in question, so this did not present a problem.

However, the Daily Star explained that its journalist talked to one of the parrot’s owners who told him about the bird and said it was fine to doctor the image of the parrot.

Because the Star had recordings of its journalist talking to one of the parrot’s owners describing the parrot and saying he was keeping the parrot, it wasn’t inaccurate to report the owner’s claims.

Concerning the picture of the parrot, IPSO explained even if the charity thought the image was in bad taste, IPSO doesn’t handle complaints about bad taste and the photo was fine.

iMediaEthics has written to both All Star Parrots and the Daily Star.