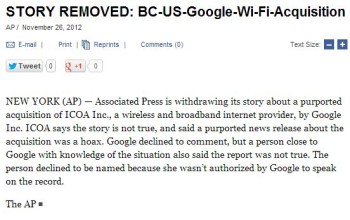 See above one of the AP story kill notices. (Credit: Boston.com, screenshot)

The Associated Press issued a “KILL BULLETIN” Nov. 26 after wrongly reporting that “Google Inc. is paying $400 million” to purchase a company that serves as an “operator of Wi-Fi hotspots in high-traffic locations,” NPR reported.

The kill notice reads, according to a posting on Philly.com, that the AP was “withdrawing its story about a purported acquisition of ICOA” because the company “says the story is not true” but based on a “hoax” press release. In addition, the kill notices notes an anonymous “person close to Google” denied the claims.

ICOA’s CEO and chairman, George Strouthopoulous, is also quoted as telling the Globe and Mail that the press release is “wrong, false and misleading info.”  The Providence Journal posted the phony story along with the kill notice. That story reads:

“Google has bought an operator of Wi-Fi hotspots in high-traffic locations such as airports, hotels and fast-food restaurants.  Google Inc. is paying $400 million for ICOA Inc., a Warwick-based company, as part of the search company’s efforts to diversify its portfolio.

“ICOA owns or operates Wi-Fi wireless access services in 40 states. It also sells technology for others to run similar Wi-Fi networks under their own brands.

“It’s not Google’s first venture into Internet access. The Mountain View, Calif., company is building an ultra-fast wired Internet service in Kansas City, primarily to showcase for what’s technically possible and to test new ways to use the Internet. (Associated Press)”

NPR noted, as did All Things D, that the press release didn’t have any “comments from either company” or “contact information” but did have “Several typos or grammatical mistakes,” and pointed to All Things D’s article on the hoax.

All Things D reported that the press release in question ” was posted on PRWeb, a low-cost service operated by the PR software firm Vocus,” but taken down Nov. 26 by 1:45 PM ET.  “Whoever sent the press release likely counted on it being propagated by journalists who wouldn’t bother to confirm whether it was true or not, so that traders would bid the price up,” All Things D wrote.

“PRWeb transmitted a press release for ICOA that we have since learned was fraudulent. The release was not issued or authorized by ICOA. Vocus reviews all press releases and follows an internal process designed to maintain the integrity of the releases we send out every day. Even with reasonable safeguards identity theft occurs, on occasion, across all of the major wire services. We have removed the fraudulent release and turned the matter over to the proper authorities for further investigation.”

CNN, which noted that it fell for the 2011 hoax about Internet Explorer browser users, listed numerous outlets hoaxed including Tech Crunch, Forbes, Reuters, “PC Magazine, The Next Web, Business Insider, Engadget, VentureBeat, The Verge and GigaOm.”

Tech Crunch added an “update” to the top of its story admitting its failure to check the story with Google and ICOA.  The Tech Crunch statement reads:

“Update: It turns out that a PR agency or some other individual gone rogue was dead wrong on this. The announcement that crossed the wire is said to be not true at all, as per ICOA’s CEO, and now also confirmed by Google.

“We were wrong on this post, for not following up with Google and the other company involved and instead posting assuredly before getting a solid confirmation from either source. We apologize to our readers, to the companies involved, and we’ll be sure to act in a more responsible manner for future stories, rather than blindly trusting the word of a website that doesn’t necessarily hold itself up to any journalistic standards.”

iMediaEthics has asked Tech Crunch asking why the “update” isn’t labeled a correction or retraction. TechCrunch‘s John Biggs responded: “Because it’s an update to an existing post.”

iMediaEthics asked Google for comment and if the AP contacted the company for comment before publication, but a Google spokesperson said “we don’t have anything to share.”  ICOA was also asked for its reaction to the hoax.

iMediaEthics has also written to the Associated Press asking how the story made it to publication, how the kill notice and any corrections were distributed and what the AP’s policy for using press releases in stories is.  We’ll update with any comments.