Are September 11 Hijackers Counted As Victims? 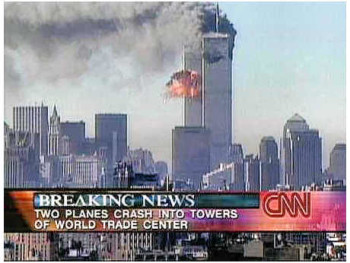 However, according to the figures given on pages 4-10 of The 9/11 Commission Report, there were only 246 victims (213 non-hijacker passengers and 33 crew members) and 19 hijackers onboard the four planes. (Close assessment of the article reveals that Hirschkorn apparently incorrectly included 10 of the hijackers in his victim count. This absence of basic verification by Hirschkorn and his CNN editors is especially egregious due to the need for sensitivity for 9/11 victims.

CNN.com has a reputation as a reliable news source, thus people freely cite CNN’s facts without testing its claims. CNN.com owes its readers and viewers accuracy. Harm can be caused by careless reporting. Since Hirschkorn classifies some of the terrorists as victims, anyone who reads his articles is provided with incorrect information. Moreover, Hirschkorn’s mistake insults the memory of the actual victims of the tragedy by counting terrorists among them.

Marian Fontana, widowed after the loss of her firefighter husband on 9-11 and founder of the 9-11 Widows’ and Victims’ Families Association, stated that the media has a responsibility to avoid mistakes like Hirschkorn’s.  “The media is such a powerful voice, sometimes more powerful than the government,” she said. Furthermore, she explained that though there was confusion regarding the number of victims in 9/11’s immediate aftermath, enough time has passed that such mistakes should not be made. “Years later, there’s no excuse, especially for things like the number of victims.”

Due to the nature of the Internet, anyone with a computer and a modem could easily stumble upon these articles in a common Internet search. School children doing reports on 9/11 who have come across CNN’s incorrect data are likely presenting the incorrect numbers as fact. Worse yet, the incorrect data spreads like a virus. Hirschkorn’s articles are linked to and quoted in their entirety on various news websites and forums, thereby misleading an even larger audience than CNN.com’s substantial reader base.  (See sample of numerous sites containing Hirschkorn’s incorrect data at the end of the document.)

To properly determine the number of overall victims using Hirschkorn’s method, the hijackers would have to be subtracted from all of the passenger numbers. Hirschkorn failed to adhere to one standard when determining his victim count, and consequently inadvertently referred to 10 of the men behind one of the greatest tragedies in recent memory as victims of their own hijacking.

The following graphs clarify the data described above.

By thoughtlessly publishing these unverified facts, CNN.com unwittingly continues to propagate misinformation years after the event. (Note Hirshkorn’s publication dates: May 28, 2004 and June 6, 2004. He obviously had plenty of time after September 11, 2001 to check the victim numbers.)

According to the Society of Professional Journalist’s Code of Ethics, journalists should always, “Test the accuracy of information from all sources and exercise care to avoid inadvertent error.” CNN.com’s editors and Phil Hirschkorn failed to do proper verification. They should revise these articles before any further damage is done.

Furthermore, CNN should also notify sites that quote from and link to these articles, so the other sites can make corrections as well. By taking these steps, CNN.com can attempt to undo some of the damage they’ve caused. CNN editors and Hirschkorn need better fact checking to prevent similar incidences of error from occurring in the future.

Are September 11 Hijackers Counted As Victims?