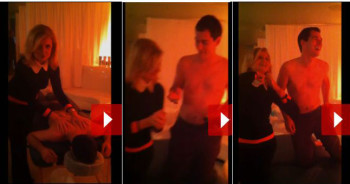 Massaging sources for information is not a new phenomenon in journalism but apparently Arianna Huffington has taken the old adage quite literally.  She has spent the past week with her arms deep in massage cream as she, and her army of always unpaid volunteers, literally “rubbed” elbows of the journalists and the GOP’s elite in Florida this past week.

The Huffington Post ran a pop-up spa at last week’s Republican National Convention and has plans for another spa at the upcoming Democratic National Convention in Charlotte, NC.  The elaborate spa which offered drinks, meals, massages, facials, make-up touch ups and yoga classes — all for free — was around the corner from the Republican convention.

The Huffington Post has bestowed the title of “health team” to the spa slaves who work only for tips and the ever promised “exposure,” according to Salon.com.   Is it exposure for the spa slaves or for journos participating? (iMediaEthics wonders if the cash tips to Arianna for her “angel hands” will translate into news tips and cozy coverage for the Huffington Post at a later date? Only time will tell. )

According to a comment sent to Jim Romensko by Huffington Post communications director Rhoades Alderson, The Huffington Post made a $40,000 contribution to the yoga not-for-profit, Off the Mat and Into the World, and they in turn secured the unpaid volunteers for the spas at the Republican and Democratic national conventions. Is this just a fancy way to write off a luxury for reporters and pundits?  If the Huffington Post just paid for the massages directly, I doubt the IRS would see it as a legitimate charitable contribution. Alderson says Huff Post “donated” $40,000 — the same amount it would have cost them to hire massage workers. Alderson said:  (Emphasis ours).

Off The Mat Into The World, which provides yoga instructors and masseuses for Huffington Post Oasis, is a non-profit with a mission to teach the benefits of yoga and relaxation practices to people not previously exposed to them. Many of us at the conventions fit that description, so it’s an ideal audience for them. Practitioners volunteer because they believe in that mission. Huffington Post donated $40,000 to Off The Mat Into The World, an amount that would have covered yoga instructors and masseuses in another arrangement.”

So are taxpayers helping to foot the bill of Huffington’s swank spa for swells? “Another arrangement” as Alderson puts it, such as corporate gifts of services for Pols and Journos, would not net a charitable tax deduction for Huffington.

The spin on the spa is that healthier and better rested journalists, delegates and politicians will be better at their jobs. Their “mission” to rub the political and journalist  elite the right way is apparently not a self-serving enterprise but a humanitarian effort that really benefit us all.

“Refusing to pay workers, whether journalists or health professionals, is a sadly fitting tribute to the candidate of the one-percent. We know this is how Arianna operates. With the National Writers Union, writers and their allies are delivering a powerful message that this kind of exploitation must end,” says Andrew Van Alstyne, Organizer of the National Writers Union’s Pay the Writer campaign.”

The spa originally debuted at the Denver 2008 convention, according to Capital New York, but with a simpler version, offering only snacks and massage chairs.

In truth, Arianna Huffington has her staff of unpaid volunteers doing most of the rubbing but Huffington did make at least one exception for Time reporter Joel Stein.  The topless Stein raved about his rubdown saying “Arianna, it turns out, has the hands of an angel,” on his blog but watching him try and make small talk while Arianna oiled him up was anything but relaxing. At the end of his massage, Stein asks Arianna, “Now this is awkward, but do I tip you in cash?”

Stein hands over a bill to Arianna and she stuffs it down the front of her shirt.

How is that for a happy ending?