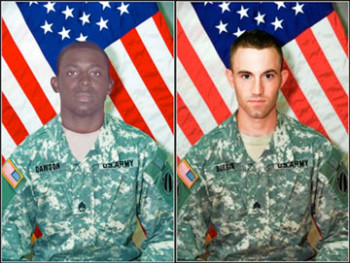 US Army adds deceased soldier's head to image with Photoshop. Ryan, Think Progress, wrote, "Staff Sgt. Darris Dawson and Sgt. Wesley R. Durbin, who both died in Iraq on September 14. Between the two photos, only the name, rank, and face of each soldier changes"

“The Associated Press retracted two government-issued photographs last night after a photographer in Texas alerted the agency that the photos in question appeared to be doctored.

“Bob Owen, chief photographer of the San Antonio Express-News, notified the AP that the photos of two deceased soldiers, who died in Iraq on Sept. 14, were nearly identical. Upon examining the photos, Owens noticed that everything except for the soldier’s face, name, and rank was the same. The most glaring similarity, Owen told CJR, was that the camouflage patterns of the two uniforms were ‘perfectly identical. ‘ ”