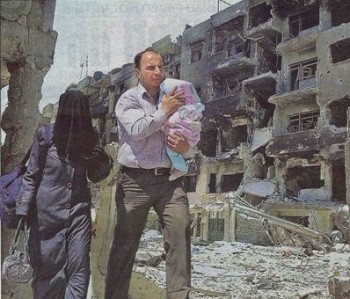 Krone published the above doctored photo. The photo was faked by taking a European Pressphoto Agency picture of a family and replacing the background. Krone apologized for not disclosing that the photo was a "photomontage for the purposes of illustration."(Credit: Krone)

The picture  – published in the country’s biggest selling Kronen Zeitung (Krone) newspaper – shows a father cradling a child with a woman in a hijab beside him as they hurry through what appears to be the bombed out ruins of the city.  It was being used to illustrate a story on people fleeing the city as government forces clash with rebels.

See above the fake photo as printed in Krone.  The photo above doctored a real photo of a family into a photo of ruins. (Credit: Krone)

The original photo – which first appeared on the European Pressphoto Agency’s website on July 26 – shows an ordinary family walking along an undamaged street.

See above the original photo. The picture published by Krone uses the real image of the family with a different background. (Credit: European Pressphoto Agency, screenshot)

The doctored picture was used on web postings afterwards to show how western media was trying to manipulate public opinion as a precursor to military action in the Middle East.

For example, a news site claiming to be the Libyan Broadcasting Corporation, but hosted in the US, said that the Krone was not only the world’s most succesful tabloid but also the “Mother of All Forgers,” a sarcastic reference to the famous statement by Saddam Hussein when he was president of Iraq and had threatened to start the “the mother of all battles” after the invasion of Kuwait in 1990.  The website wrote:

“What should the readers think of the most widely read newspaper in Austria, if they distort so grossly the reality? If this garbage paper was not already discredited before, then certainly now. Disgusting … a blatant deception of the reader with Photoshop.

“But this is now not longer uncommon for the mass media. Whether newspapers or on television, many fake reports and photographs come from another place or another time, when it comes to rebuilding an image of enemy in the minds, so that NATO can do the next war.”

Similarly, Gizmodo wrote that it’s “just disgraceful” to doctor the photo to “make a part of the world  that has enough problems as it is look even more apocalyptic.”

The Krone does boast a readership of 2.7 million, which in a country of just over eight million, backs the claim to it being one of the world’s most succesful tabloids.

iMediaEthics wrote to Krone for more information but was referred to the public relations department, which declined to answer questions and instead directed us to publisher Christoph Dichand’s July 31 page 2 apology.

“In the Kronen Zeitung from the 28 July on page 4 we printed a photomontage of the civil war in Syria. The photo of a refugee family was shown in front of destroyed homes.

“Although we had correctly obtained copyright for usage of both images (EPA and AFP) we sadly failed to indicate that it was a journalistic device of a photomontage for the purposes of illustration. We apology for this failure.”

Ironically, the apology was printed opposite a photomontage on page 3 about another story that this time was correctly highlighted with the credit (Fotomontage: DK Images, Reuters, AP).

The media ombudsman at the Austrian Journalists Club (ÖJC), which has more than 6,700 members and as such is the largest independent organization for journalists in Austria, said they had looked into the matter even though they had receieved no formal complaint, and reminded editors that manipulating pictures was against the voluntary Austrian media code of conduct.

ÖJC-Präsident Fred Turnheim however welcomed the swift apology (three days later) by publisher Christoph Dichand. He told iMediaEthics there was no law in Austria making it compulsory for editors to mark up photomontage pictures with corrections.

The Krone didn’t say what steps had been taken to make sure it did not happen again, whether the staff involved had been sanctioned or what they felt about the Krone being used as propaganda by pro-Syrian web users saying it showed western media was biased – and blatantly lying in its coverage of Middle Eastern affairs.