Author Apologizes for Writing Postiive Reviews about His Work 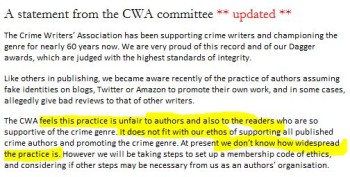 “I wholeheartedly regret the lapse of judgment that allowed personal opinions to be disseminated in this way and I would like to apologise to my readers and the writing community.”

Gawker added that the Crime Writers Association weighed in on the self-reviews, which it called “misleading” and “unfair.” That statement, published on the association’s website, notes that the association is “taking steps to set up a membership code of ethics, and considering if other steps may be necessary from us as an authors’ organisation.”

Further, the association wrote that fake reviews don’t “fit with our ethos of supporting all published crime authors and promoting the crime genre” and that the association doesn’t “know how widespread the practice is.”  And, moving forward, Ellory “offered to resign” from the association, according to the CWA statement.

The Guardian reminded readers of the case of Orlando Figes’ online reviews. As we wrote in 2010, the formerly distinguished historian Figes admitted to posting negative reviews of his competitors’ books and positive reviews of his own books, after author Rachel Polonsky looked into what she found as questionable reviews.  But the tale didn’t end there.  Figes said he would sue over claims he wrote the reviews.  His wife, lawyer Stephanie Palmer, claimed she wrote them.  And then, Figes admitted writing them, calling the reviews “stupid” and “some foolish errors.”  Later in 2010, Figes apologized for the reviews, and both he and his wife paid “unspecified damages and legal costs” to Polonsky and another competitor for his reviews.

We’ve written to the Crime Writers Association and Ellory’s representatives for more information and will update with any response.