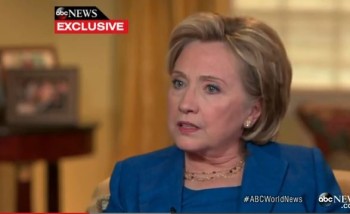 Bad news for Hillary Clinton: The latest ABC/Washington Post poll shows her falling short of “universal appeal.” According to the shocking report, she has “chinks in her armor.”

Moreover, even her supporters believe the Democratic nomination process should be…democratic.

The poll, published last Sunday, found her leading Joe Biden, her closest rival for the nomination, by 69% to 12% among Democrats across the country. And in a hypothetical race for president against each of three candidates – Chris Christie, Jeb Bush, and Rand Paul – she is supported by an identical 53% of all registered voters, while Christie and Bush each get 41% and Paul 43% support.

Leading each of her Republican opponents by double digits puts her in a good position, ABC reports, but “that said, even among Democrats who support her for the nomination, 58% also say they’d rather see other candidates run as well – a preference for a race, not a waltz.”

Yes, even Democrats want to see her run rather than waltz into office. How deplorable.

Moreover, it appears that there are actually some groups of Americans who do not see her as positively as others. Here are the startling facts:

Another problem for Clinton is that on four personal characteristics measured in the poll, she fares the worst on empathy. By a margin of 55% to 42%, voters say she understands “the problems of people like you.”

As the report notes, “While each [attribute] is an important element of a candidate’s support structure, empathy can be particularly attractive to voters in difficult times. The fact that it’s the weakest of these measure for her does represent a potential chink in her armor.”

O.K. — nobody really cares about “new ideas,” but don’t “strong leader” and “honest and trustworthy” trump mere empathy? Whatever.

In any case, being told more than two years in advance of the presidential election that Clinton may not be a perfect candidate can be unsettling to some. Why couldn’t ABC wait until closer to the election campaign to provide this information?

On another matter: The report noted “She [Clinton] is the subject of an ABC News special with Diane Sawyer, airing Monday evening at 9 p.m. Eastern time.”

Ah, that’s what the poll was all about…so Diane could tell Hillary all about those chinks in her armor, in case she didn’t know. We knew there had to be a good reason for such an insightful poll.