BARBARIANS AT THE PARLOR DOOR: Salon on Readers’ Online Comments 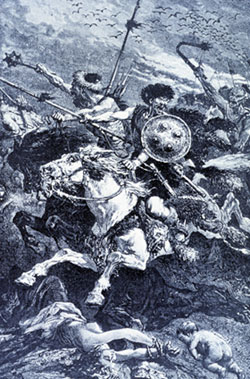 Gary Kamiya, writer for the online magazine, Salon, in his recent article, “The Readers Strike Back,” has a modest request: online publications need to do a better job of “filter[ing] the reader dreck.” (By “dreck,” or trash, he is referring to reader comments attached to online articles.)

The article is interesting for a number of reasons—not least for its rough handling of the blogosphere, but also its assertions about the new position publications find themselves in filtering online reader commentary.

“Writers are being pulled, or lured, down from their solitary perches and into the madding throng. This has opened useful debate and made writers accountable. But it has also thrown open the gate to creeps, narcissists and wannabe Byrons who threaten to damage the fragile, half-permeable membrane writers use to keep the world from being too much with them,” writes Kamiya.

The article was timed to the release of Salon’s new system of rating letters to the editor. Under the new protocol, “good” letters get stars from the editors and are separated from the rest of the riff-raff in a category called “Editor’s Choice.” Readers can still sift through the whole body of commentary, but it requires willingness to click through separate pages rather than seeing the whole mess in one running list.

This is nothing new. Magazines have always evaluated letters from readers, and in special cases published—with careful edits—letters that offered focused commentary. But in the great journalism experiment that is the Internet, online publications like Slate and Salon and even traditional print publications like Mother Jones and The New York Times have collected masses of commentary in largely unfiltered reader feedback sections.

That Salon is actively evaluating these letters is, in one respect, refreshing. In this context, Salon’s new editorial system to star select comments seems generous, tolerant, maybe even pious. Readers are given the appearance that at least some of their comments are being evaluated by a living person on the editorial staff.

However, as in the old convention, questions of editorial bias arise. Are the letters selected by Salon’s editors an accurate cross section of reader input? Are comments being ordered in such a way to undercut arguments in previous letters? In earlier times it was as simple as not letting a letter see the light of day; but now letters that challenge authorial credibility can be buried in massive digital archives.

Consumers of journalism have always faced these pitfalls. That Salon has left the unfiltered commentary in place is commendable—though its usefulness is diminished by a clunky interface. (Poynter Online features a system that allows readers sort comments by date or author and to expand into one page).

One strange facet about Kamiya’s 5200-word piece that should not be overlooked, however, is that he spends so much of it lauding the cultivated voices of professional writers and slamming his “amateur” critics. A closer read suggests that there is a calculated editorial motive: baiting a response from the blogosphere.

And, indeed, it did. 300 comments worth in three days. Of those 300 comments, 28 at the time of this post were deemed worthy of praise by Salon’s editors. But are we meant to believe that Salon’s editors vet each and every comment, or does the selection of 28 out of 300 hint at Salon’s limited editorial resources?

A quick comparison of the Editor’s Choice letters to the unfiltered commentary reveals nothing earthshaking: the criticism and praise in the Editor’s Choice section tends to be lukewarm but not necessarily more rigorously argued or topically relevant. (One highly astute commentator, who asked whether Kamiya got paid by the word, went unrecognized.)

The term online aficionados use for one who intentionally provokes outrage in an online forum is “troll.” The term is apt here. From Salon’s bully pulpit, Kamiya prodded the blogosphere into an avalanche of angry mail. The provocative presentation almost assured an emotional repsonse.

Unfortunately, Salon cynically used the manufactured furor to manipulate its readership and prop up its new and “democratic” editorial system. The hordes at the gate may be aghast to find that the barbarians are already running the castle.

BARBARIANS AT THE PARLOR DOOR: Salon on Readers’ Online Comments

Kudos to the Des Moines Register for Shelving Their Latest Poll – But Does It Matter?
2 Serbian news outlets criticized for rape reporting