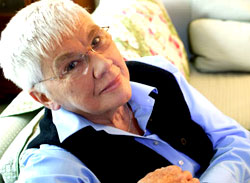 A BBC radio program, What Do You Believe, took author Dorothy Rowe’s comments about religion and spun them into a statement nearly “the opposite” of what Rowe said. This isn’t the first time the BBC has come under fire for misquoting sources.

Rowe remembered her comments and immediately complained. In a letter to the BBC, posted on Rowe’s website, the acclaimed psychologist said, “My words were edited to make it sound that I held a favorable opinion of religion in that it gave a structure to a person’s life. What was not broadcast was what I had said about how such structures can be damaging to people. Being misquoted in this way concerned me greatly.”

The Guardian reports that, “Rowe, who is in Australia promoting a new book, said on her website she had no option but to complain as she was acutely aware of the dangers of ‘having something in the public domain that did not represent my views’ and which would ‘could cause me considerable problems, particularly when the subject matter was religion’. She said the interview ‘sounds like I am giving unqualified praise to religious belief. There is no mention of what I talked… about at length, that religious belief can cause immense misery. I often summarise this with: ‘The church keeps me in business’.'”

The executive producer of the BBC’s Religion and Ethics Department, Christine Morgan, apologized to Rowe, saying she was, “very concerned to find that, as you say, the programme did not accurately reflect the view you expressed” and invited Rowe to write an article accurately expressing her views for the BBC’s religion and ethics website. Rowe expressed disappointment that Morgan seemed to be “saying she was sorry I was distressed, not that she was sorry that I had suffered an injury”.

When editing a sources comments, it is the responsibility of the producer to make sure he doesn’t put a personal spin on any comments.. The public is listening for the expert opinion, not that of the BBC producer!