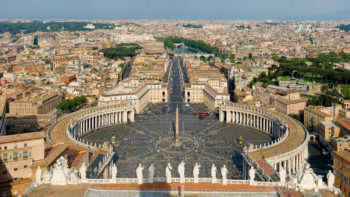 But, after two complaints to the BBC, the broadcaster acknowledged its July reporting “did not give due weight to public statements by  successive Popes or the efforts made on the instructions of Pius XII to rescue Jews from Nazi persecution, and perpetuated a view which is at odds with the balance of evidence.”

The BBC’s comments came in a December 6 published ruling in response to complaints by Lord David Alton, Chairman of the Christian Heritage Center, and Father Leo Chamberlain of Ampleforth. The BBC’s Editorial Complaints Unit examined the matter and agreed with the complainants.

Father Leo told iMediaEthics by e-mail: “In measured terms, the statement means that the BBC accept that this received view on Pius XII is not just a matter of controversy but plain wrong. In fact Pope Pius XII acted wherever he could to save Jewish lives; according to one authority, Pinchas  Lapide, he, and those working for him, such as his Nuncio, Angelo Roncalli, the future Pope John XXIII, saved at least 700,000 Jews from the death camps.  Jews were hidden in religious houses throughout Italy.  This was recognised after 1945 by, among others, Albert Einstein, Golda Meir, and Chaim Weizmann.  The assault on the Pope’s memory originated in a KGB disinformation project initiated by Khrushchev known as Seat 12.  [Rolf] Hochhuth, a previously unknown East German, published a play, The Representative, in 1963 making these allegations.  They have been repeated by others in the last 20 years.  This sounds like conspiracy theory, but the truth is now well documented.”

The July reporting “did not give due weight to public statements by  successive Popes or the efforts made on the instructions of Pius XII to rescue Jews from Nazi persecution, and perpetuated a view which is at odds with the balance of evidence,” the BBC said in a December 6 published ruling. As such, the BBC said it informed the editorial team behind the July reporting.

In a blogpost, Lord Alton, one of the two complainants, responded to the BBC’s ruling:

“After several unsuccessful attempts to seek a correction, we felt that we had no choice but to make a formal complaint to the Editorial Complaints Unit (ECU). We presented a dossier of material – all of it publically available to any reporter.”

He suggested a “charitable” explanation for the BBC’s error was “that it was a sloppy, lazy, throw-away remark – indicative of the sort of religious illiteracy that can cause so much offense; and part of a blurring between the straightforward reporting of news and the desire to add some melodrama to spice it up. Don’t let facts or truth spoil a good story. Less charitably, the BBC report may be seen as simply the latest example of a long-running attempt to rewrite history.”

Alton, and Father Leo in an e-mail to iMediaEthics,  called for the BBC to commission a documentary about the matter.

When asked for comment, the BBC pointed iMediaEthics to its editorial complaints unit ruling.