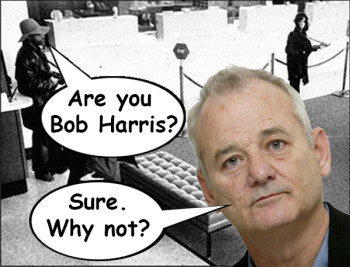 Bill Murray often earns headlines for his silly off-screen antics, but a satire story has credited him with a feat he has not accomplished (yet): bumping into a bank robber.

Nonetheless, the UK Express was duped into reporting that while Murray was in Tokyo last year, he ran into a bank robber.

“The 62-year-old Groundhog Day star was left surprised when a thief ran into him after robbing the Bank of Tokyo-Mitsubishi. Bill says: “I saw this man running towards me with a bag in his hand. Then he suddenly stopped when he saw me and asked me if I was Bob Harris, the character I played in Lost In Translation.

“I told him, ‘Sure, why not?’ Then he started telling me how much he loved me.”

While the story was actually published a year ago, on Feb. 11, 2013, the Express report caught iMediaEthics’ eye after Mediaite debunked the Murray bank robbery tale this month.

The Bank of Tokyo-Mistsubishi told iMediaEthics by e-mail when asked for comment on the claims it was robbed and Murray stopped the robber, “We have no knowledge of any such matter.”

So what’s the deal with the Murray bank claim? All of the sources for the Murray-Tokyo-robbery claim are not recognized news outlets, except for the UK Express, a tabloid. The story originated on a recognized satire site The National Report, and a site called The Nutty News (enough said?).

Further, The Nutty News story reported that Tokyo’s police chief commented on the incident and that the chief’s name was Yakuza Mori. Earlier this year, Tokyo daily newspaper the Japan Times reported that Naoyoshi Takatsuna was the new police chief, succeeding Yasuhiko Nishimura.