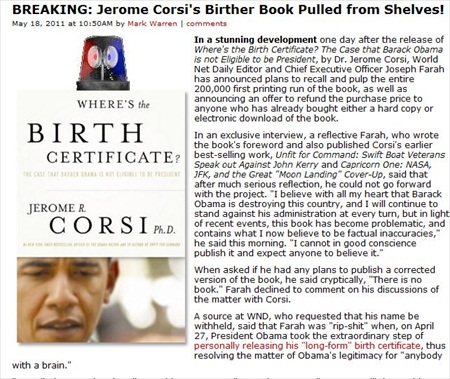 Earlier this week, Esquire magazine published a story on their website claiming that a book publisher was yanking all copies of the new book about Barack Obama’s birth certificate from shelves and refunding any books already purchased. But, the article and its quoted facts weren’t real; they were satire.

In response, the book’s publisher, WorldNetDaily’s Joseph Farah has announced he may sue Esquire — especially since Esquire didn’t label it as satire until the post had been live for more than an hour.

The book, Where’s the Birth Certificate: The Case that Barack Obama is not Eligible to be President, was written by Jerome D. Corsi and published by WorldNetDaily Books.

Esquire’s satire article claimed to contain an exclusive interview with Farah, who is quoted saying: “In light of recent events, this book has become problematic, and contains what I now believe to be factual inaccuracies.  I cannot in good conscience publish it and expect anyone to believe it.”

But, Esquire didn’t label that story as satire until it had been published for more than 90 minutes, leading readers to assume the story was straight news. In an update, Esquire explained:

“We committed satire this morning to point out the problems with selling and marketing a book that has had its core premise and reason to exist gutted by the news cycle, several weeks in advance of publication.”

In response to the story, Farah told Talking Points Memo in an interview that he may sue over Esquire’s article.

Farah explained even he had to read the story a few times in order to get that it was a parody article.  He added that he was “under seige” with people calling him to ask about the report.  Farah went on:

“Obviously if it was intended as a parody, it was not very well executed, and quite honestly I can tell you that I believe there’s some very real damage done by this article, and I’m exploring our legal options right now.  I think there are potentially some issues like restraint of trade and possibly libel, I think most people looked at that article and believed I actually said those words, that is a real problem for Esquire.”

World Net Daily reported that Farah called the article “an astonishingly reckless report by a company that has demonstrated its total disregard for the truth.”

“We are exploring our legal options right now.  There is no question of damages from this irresponsible attack. This book was released yesterday. Our author is in day two of a media tour. This report is playing havoc with a bestselling book – and there is little question that is the intent.”

Corsi’s book was released May 17.

iMediaEthics has written to WorldNetDaily and Esquire for comment and will update with any response.

UPDATE: 05/20/2011 9:58 AM EST: WorldNetDaily posted a story last night with a statement from its founder, Joseph Farah, about its potential legal action against Esquire.  Farah is quoted as saying:

“I have concluded with attorneys who say we have an excellent chance of winning a lawsuit or lawsuits for the reckless disregard for the truth demonstrated by Mark Warren, Esquire and the Hearst Corporation in this matter.

“Personally, I think we should set our sights on taking ownership of Esquire. I think that would be a fair settlement. Obviously the magazine is in dire need of professional management.”