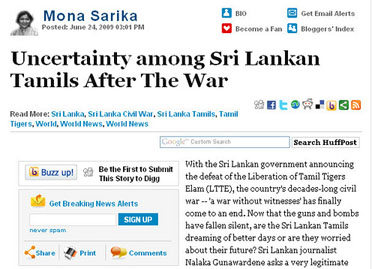 Screen capture of one of Mona Sarika's articles for the Huffington Post. (Via: Indi Samarajiva)

With Jayson Blair lecturing publicly to university students about how plagiarism and fabrication got him kicked off the New York Times, you’d think young journalists might be getting it into their heads that making things up is not OK.

But just last week, a reporter writing her first column for the Wall Street Journal was outed for some behavior that is strikingly Blair-like.  According to the correction posted by the Journal, a November 10 online column by Mona Sarika was found to contain “information that was plagiarized from several publications,” re-used direct quotes, and “changed the original speakers’ names to individuals who appear to be fabricated.”  Sarika’s writing for the Journal–as well as the Huffington Post and Foreign Policy, where she also contributed–was unpublished from the Web.

Writing about Huffington Post, Silverman says, “In this case, it provided an editor’s note, but the note doesn’t detail exactly what was wrong with Sarika’s work on HuffPo. What did she plagiarize, and what was misattributed?”

Foreign Policy links to two specific stories Sarika plagiarized, writing “In her Oct. 30, 2009 article for ForeignPolicy.com, “Pakistan’s Coming Horror,” freelance writer Mona Sarika plagiarized and misattributed quotes from these sources (1, 2) on the BBC’s Web site and, we believe, may have fabricated her interview subjects.”

But, as Silverman points out, Huffington Post’s editor’s note states only “Due to repeated instances of plagiarism and misattribution, both on HuffPost and elsewhere, Mona Sarika’s work will no longer appear on The Huffington Post.”

“When people leave their homes in the morning they fear for their lives,” Taj Javed, a freelance journalist, told me. “People are very scared and you can easily see it; there are fewer people on the streets. When I see security forces, I feel there will be soon another attack. We are sick and tired of the attacks.”

This is very similar to the following quote from a blog on BBC News article titled “Pakistanis reflect on army offensive” published online on 17 October. The entry was from Basma Khan, from Lahore.

“I support the army action – something must be done to stop the militants. The lack of security is affecting all of us in Lahore. When people leave their homes in the morning they fear for their lives. There are so many security forces here in Lahore that I actually feel more unsafe now. It makes me think there will be another attack soon. Everyday I have my ID checked or my car stopped. I see police and armed security forces everywhere. It is sad that the image of Pakistan has become so tarnished by the terrorists. They are distorting the image of our country and of Islam. The militants recruit young and innocent people who do not have exposure to the cities or the outside world. But most people in this country just want peace. We are sick and tired of the attacks. I hope that actions will speak louder than words, and people will see that the army is doing all it can do to crush these militants. I hope the world will see that it is the Pakistani people who are the most threatened by these terrorists.”

Moncrieff also notes one specific example of Sarika’s plagiarism at the Huffington Post–an article titled “Uncertainty Among Sri Lankans After the War.” According to Moncrieff, “One of the people ‘quoted’ in the article, Indi Samarajiva, later complained about the article” in a blog that can be read here.

Among the quotes featured in that article was this one: “What America ‘s basically saying is, ‘We’ve educated you, we’ve trained you, we’ve taught you all about our markets,’ says Vivek Wadhwa, a successful Indian-born tech entrepreneur turned Duke University professor. ‘Now you have to get the hell out of here.’”

In an actual telephonic interview, Wadhwa reacted to the revelation: “It’s curious that I was quoted and I had not done the interview. I didn’t even know who she was.”

From the examples available, it is clear that Sarika had crossed the line in her work for all three of these publishers. Silverman seems to imply in his critique of Huffington Post’s bland correction that even greater transparency about the details of the columnist’s misdeeds might be warranted. Even with limited evidence the decision to remove Sarika’s stolen and fabricated work is justified; It wouldn’t be fair to the authors of the original work for her thefts to remain on the web. Still, a more detailed discussion of what Sarika stole, and from whom can’t hurt.