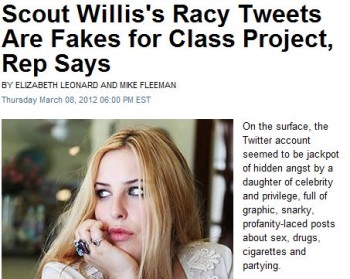 Blog Ivy Gate published on March 7 information from the Twitter account of @bougpunk, which Ivy Gate identified as the account of Scout Willis, the daughter of actors Demi Moore and Bruce Willis, People reported. Ivy Gate identifies itself as “the Ivy league blog” for “news, gossip, sex, sports and more at Brown, Columbia, Cornell, Dartmouth, Harvard, Penn, Princeton and Yale.”

Willis is a 20-year-old Brown University student, according to Us Weekly.

The tweets were as attention-getting as they were “full of graphic, snarky, profanity-laced posts about sex, drugs, cigarettes and partying,” according to People magazine.  But according to People, “a rep speaking on behalf of Scout” Willis explained that the tweets were “all fakes created by Scout and two other students to test a theory” for a class assignment.

In a follow-up March 8 post, Ivy Gate wrote skeptically about the reports that the account was for a class project.  Ivy Gate wrote:

“100% satire. Right. If so: for which class? Taught by which Brown professor? Do you know? Email us immediately. As in right now. For the time being, we will ignore the absurd idea that @BOUGPUNK would actually pass for a final project at Brown, or anywhere in higher education. And I guess you can ignore the fact that Scout’s Twitter feed commenced in late October of last year and continued until late last month. Because that totally sounds like a final project.”