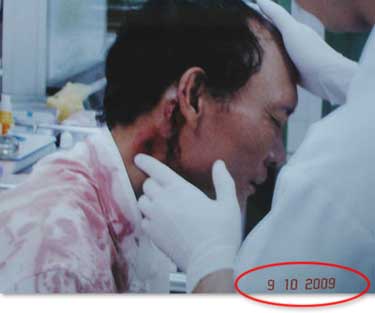 IS IT A FAKE PHOTO? The timestamp on this photo, from a story in the Vietnamese paper Dantri.com says 9/10/2009. But the photo's metadata marks that the image was originally created in 2005.

On October 9, on freerepublic.com, Vietnamese blogger DieuVan Nguyen argued that a news photo implicating two Vietnamese journalists was a fake: Nguyen reports that Dantri.com, a Vietnamese online paper, had published a story about two journalists arrested for assault.

The accompanying Vietnamese police photo of an injured man features a timestamp dated 9/10/2009 (October 9, 2009—dates are traditionally written day/month/year in most countries, including Vietnam).  But, Nguyen alleges, the metadata contained in the image file actually shows the photo is from 2005.

Nguyen argues that the fake photo is a ploy to falsely implicate the two journalists. iMediaEthics examined the photo and found two pieces of evidence that support Nguyen’s claim that the photo is not what it seems.

“According to Police records from Dong Da district, about 20h30 on 8 / 10, Mr. Do Ba Tan (her husband Tran Khai Thanh Thuy) for motor block in the way of traveling street fair 178 Kham Thien.”

If the attack occurred on Oct. 8, it would be reasonable to assume that the injury photo was also taken on Oct. 8, when the officer, Nguyen Manh Diep, was likely to be rushed straight to the hospital with a bleeding head wound.  Yet the photo is time-stamped 9/10/2009. This further supports the possibility that the timestamp on this photo could have been faked.

Both of these discrepancies are illustrated in the comparison image below:

Clearly there is enough evidence here to strongly question the photo’s authenticity, if not prove outright that it was faked–especially in the context of a state-run newspaper publishing in a country with a history of arresting independent and dissident journalists.

We have contacted DieuVan Nguyen to  find out if there have been any advances in the story, and will publish an update if anything new comes to light.