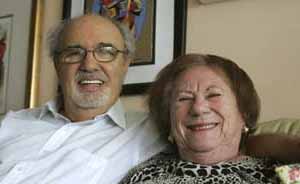 WHERE WERE THE JOURNALISTS?: Herman Rosenblat made up a story about how he fell in love with his wife as a child in a Holocaust concentration camp. He dupped everyone, including Oprah Winfrey, book publishers and journalists, until a blogger in Taiwan caught on to the hoax.

How can every professional reporter be fooled but a blogger –who doesn’t have the same resources available–realizes he should doggedly track down a stinky story? You probably remember the recent firestorm caused by the revelation that an “Oprah-approved” book about Herman Rosenblat’s experiences during the Holocaust turned out to be a complete hoax. The hoax was uncovered because blogger Dan Bloom didn’t believe the author’s tales and spent three months looking into his “hunch”. In his research, he contacted American Holocaust historians and university professors.

In an article for UCLA’s Asia Insitute, Bloom says he “contacted top Holocaust historians in America and found that they, too, were aware of the hoax.” He said it was “these Jewish historians who found the evidence that Mr. Rosenblat’s account included false details, as they had been looking into the ‘story’ for over a year.”

Amazingly, no media outlet bothered to check with experts before praising the book in their reviews. Shouldn’t at least one journalist have been skeptical, and made the effort to call Holocaust historians? This is basic news judgment and a simple verification step that should have been made.