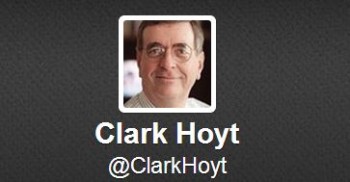 Hoyt had been working as a “Special Adviser to Bloomberg’s CEO and President Daniel L. Doctoroff,” and has a history with the company as Bloomberg News Editor-at-Large. In the Independent Senior Editor job, he will tackle complaints against the news organization.

And Tim Quinson, who has been with Bloomberg News as its executive editor in Europe, the Middle East and Africa, is the new Standards Editor, the press release said.

According to the press release announcement of the positions, Hoyt’s boss, Chief Content Officer Norman Pearlstine, is in content and Quinson’s is in editorial. iMediaEthics wrote to Bloomberg to learn the difference between the two departments and to ensure that Hoyt would have editorial independence.

Bloomberg spokesperson Ty Trippet told iMediaEthics by email that Hoyt will be “outside of News” since he reports to Pearlstine whereas Quinson works “inside news.”

“Pearlstine is chief content officer – reporting to the CEO outside of news management,” Trippet explained.

Quinson “will review major stories before publication to make sure we adhere to the Bloomberg Way,” Bloomberg Editor-in-Chief Matt Winkler is quoted as saying in a memo that The New York Post saw.

As iMediaEthics wrote earlier this month, the decision to add the two journalism jobs came after Hoyt conducted an ethical review of the company’s practices.

Hoyt’s ethical review and a separate legal review examined Bloomberg’s practices after it was revealed that Bloomberg “journalists routinely looked at client information intended for customer support employees,” Reuters reported. In response to Hoyt’s investigation of the company, Bloomberg’s Doctoroff had said the company would create the Independent Senior Editor and Standards Editor positions.

Bloomberg’s CEO Doctoroff is quoted in the Bloomberg press release as saying “These appointments continue our commitment to listen and respond quickly and respectfully to our clients, while upholding the high standards, editorial independence and integrity of Bloomberg News.”