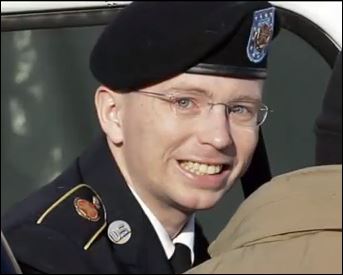 Bradley Manning was found not guilty of aiding the enemy. (Credit: YouTube,"wsjdigitalnetwork," screenshot)

Bradley Manning, who leaked hundreds of thousands of documents to WikiLeaks, was found not guilty today of aiding the enemy, the New York Times and  The Guardian report.

Manning was “convicted of 5 espionage counts” and “5 theft counts” though, according to the Associated Press’s Twitter feed.

In February, Manning admitted he was WikiLeaks’ source for the “Collateral Murder” video, the Iraq War Diaries and the Afghan War Diaries.

Manning plead “guilty to 10 criminal counts”  with that February admission.

Today’s verdict addressed 20 other charges against Manning, including aiding the enemy. The trial began in January.

“The sentencing phase in the court-martial will begin on Wednesday,” the Times reports and “it could last weeks.”