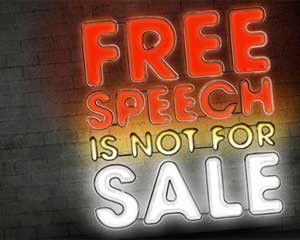 The title of a recent report by the Index On Censorship suggesting ten steps to reform British libel law. (Credit IOC)

On November 10, two British freedom of expression organizations–the Index on Censorship (IOC) and English PEN–released a report recommending a ten-step reform of British libel law. Their proposals argue that the UK’s current libel system has a “chilling effect” on journalism by curbing the free and accurate dissemination of information in the public interest, Laura Olivier, writing at Journalism.co.uk, reports.

Olivier writes that the release, ‘Free Speech is Not For Sale’, recommends elements for a new libel bill, reporting that “the groups said a new bill would ‘simplify the existing law, restore the balance between free speech and the protection of reputation, and reflect the impact of the internet on the circulation of ideas and information’.”

Libel law in Britain currently places  much of the burden of proof on the defendant–journalists accused of defamation are essentially guilty until proven innocent.

The report’s ten recommendations address the issues of presumed guilt, and costs along with a host of other aspects, including a better reflection of the online nature of modern journalism, the issue of “libel tourism” to Britain, and expanding possible defenses, like fair-comment and comment in the public interest.

‘Libel tourism,’ is a term used to describe attempts to bring libel suits against non-British publications and non-British journalists in Britain. In a video of the launch of these recommendations, journalist Simon Singh–himself being sued for libel by the British Chiropractic Association–cites the case of cardiologist Peter Wilmshurst, who is being sued in Britain for comments he made on a medical device to a Canadian journalist, published in an American online magazine. Singh says this is having an effect on what journalism is published, and what journalism is even commissioned and planned, he argues to the crowd.

Another important focus of the release, Olivier writes, is on the impact of online publishing.  “One of the report’s biggest concerns was that current legislation does not reflect the arrival of the internet,” she writes. Online publication makes it easier for companies to move libel proceedings into Britain, and raises the issue page-clicks, which under current law, can mean each viewing of an online article is treated as if it were a newly published piece.

The report has no binding influence on British law on its own. Organizers hope, though, that it will “stiffen the resolve of the current parliamentary select committee on press standards, privacy and libel,” Olivier writes, saying that “both organizations conceded that the backing of MPs would be needed to push their recommendations further.”

With the issue of journalistic free speech already on Parliament’s radar after the Trafigura-Guardian controversy, the time might be ripe for a reform of UK libel law. There is a current parliamentary select committee on press standards, privacy and libel, and Olivier reports that the groups hope their list of recommendations will “stiffen [their] resolve.”

StinkyJournalism is following developments and will cover them if and as they arise.