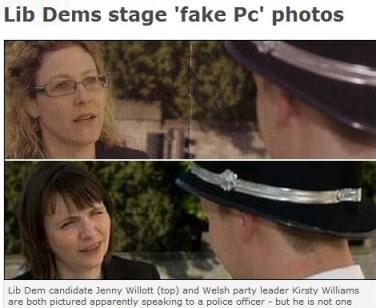 British elections were May 6.   Hopefully, the questionable photos that were spread throughout the campaign by at least one political party will cease in the future.

Wales Online reported May 5 that Welsh Liberal Democrats have admitted they used models in campaign materials for the third time.

This time, the Liberal Democrats said that parliamentary candidate Dominic Hannigan, who is photographed talking to a doctor in an election pamphlet, is actually talking to a model dressed up as a doctor.

The BBC reported April 23 the first time the Liberal Democrats got in trouble for a fake campaign photo when they were called out for using a party employee to portray a nurse in Cardiff North MP candidate John Dixon’s campaign materials.  The political party said they did so to highlight their “commitment” to the National Health Service.

They got in trouble again just a few days later.  The BBC reported April 26 that Welsh Liberal Democrat leader Kirsty Williams and candidate Jenny Willott were called out for being featured in promotions with a person portraying a police officer.  Again, that person was not an actual police officer either.

The Belfast Telegraph reported April 26 that former Welsh Liberal Democrat leaders told BBC Radio Wales’s Good Morning Wales program that “The photograph isn’t a lie. The photograph is of someone dressed as a police officer. The point is all it’s meant to do is to attract your eye to the text that’s around it.”

Is it acceptable for political candidates to suggest scenes that didn’t happen?  Do fake photos introduce a new level of skepticism to politics?  And if it’s OK to spread fake photos, do those politicians need to disclose that the photos aren’t legitimate?

The BBC reported that a Liberal Democrats spokesperson said the use of “’illustrative photographs’ was strictly limited to the policy areas of health and policing.”  Well, in that case …

Wales Online reported that Welsh Labour campaign coordinator Wayne David said “While I fully understand the Liberal Democrats have always struggled to find real, frontline public servants willing to act as advocates for their policies on election material, the time really has now come to say enough is enough, and the leaflet impersonations should come to an end.  Fake nurses, fake policemen, fake doctors? It rather begs the question if anything they printed on their leaflets was real at all.”

But, Welsh Labour isn’t exactly so innocent either, Wales Online reported.  Apparently, that party has also doctored campaign photos as well.  According to Wales Online, Labour Welsh superimposed photos of Peter Hain and Albert Owen on scenes from the Welsh island of Anglesey in leaflets.

Wales Online reported that a Welsh Liberal Democrat spokesperson said that “As the Labour Party demonstrated with ‘photo- shopped’ images on their website, illustrative photos are used to highlight a particular commitment of a political party. In this case, the photo was taken to illustrate Liberal Democrat commitment to protecting the NHS in Wales.”

The Labour Party used a party worker and member to “pose as an ordinary constituent in their leaflets,” Wales Online reported.

The BBC reported that Tories weren’t aware of any fake photos in their promotional materials.

StinkyJournalism reported last month that Colorado politician Andrew Romanoff got in trouble after it was revealed that his campaign Web site featured doctored photos.  The final photo was a collection of photos Photoshopped together, which moved minorities closer to Romanoff.  Romanoff removed the photos from his Web site two days after reports of the Photoshopping broke.