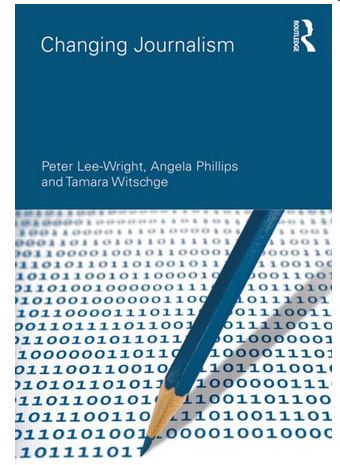 The journalists described in “Changing Journalism” (Routledge), the readable and summarily dour analysis by a trio of UK media researchers, resemble nothing more than the frog in the increasingly steamy pot of water, heart rate rising, contemplating escape as not merely an option but perhaps the only option. What a miserable industry these authors — Peter Lee-Wright and Angela Phillips of the University of London, and Tamara Witschge of the Cardiff School of Journalism — sketch across these eight brisk chapters. Formerly princes of the city, masters and commanders of the public discourse, keepers of the Fourth Estate, the journalists they survey have devolved to laptop-based ragpickers charged with selecting and directing deluges of ever-lower-grade information to an ever-stingier, ever more entitled audience. And as the production of news becomes more mechanistic, the journalists abandon their ethics. Corporate rules replace moral agency. The code of the craft yields to the need to chase the last scraps of profitability.

The synopsis of why this happens is almost as short and obvious as your average tweet. For decades, technological developments made mass media easier to create and more profitable to own. But when the means of production and distribution went thoroughly digital, anyone who cared to could create or replicate media. The glut of outlets, along with better and cheaper venues for classifieds (see: Newmark, Craig) helped to crash the market for advertising dollars. Oh, then: the Great Recession arrived, lopping off another 18 percent of the ad market in the United States in a year’s time.

Media owners who had been accustomed to 20 and 30 percent annual returns set about making up the difference by insisting fewer people produce more and more work. Time, once considered elemental to the job, became a luxury good. The work suffered accordingly, leading journalists to believe their expertise was being wasted (it is) and the audiences to believe they could do this sort of “journalism” just as well as the harried mess they saw on TV and in their shrinking daily newspapers (they cannot).

Media outlets began competing for attention at the basest levels: news of the lurid, celebrity mishaps du jour, slideshows about readers’ pets.  As the editorial content has devolved into undistinguished pablum, the ethics have followed suit. In the UK, apparently, newspapers have made standard practice of ripping one another off with such bald abandon it’s a wonder anyone bothers to finance the costly business of actually finding news. The press, as it was once called, always had to juggle profit motive with its value as a public trust. But, as Phillips and Witschge write, “commercial media will seek to fulfil economic motives before public service motives … content is inextricably linked to ways of funding news.” There is no honor among thieves, nor among journalists penny-pinched to penury.

Now we’re learning that the ethics always rested on the economics, more so than the profession would have acknowledged. As Phillips points out in her chapter on transparency and ethics, “markets function to maximise profit, not to maximise democratic debate.” Among the victims of cheap journalism, then, is the craft’s very raison d’etre. Like many authors who have gauged the fate of digital journalism, she finds that neutrality as a construct may yield to transparency, the preferred operating principle of the blogosphere (which she tweaks as “free-wheeling and apparently ethic-free”). But she suggests, too, that neutrality wasn’t exactly a dictate of some burning bush. “[F]ar from being an ethical touchstone,” she writes, “the idea that news should always be neutral grew up as a way of making monopoly news providers more palatable in a democracy.” This is one of the most hopeful twists in Changing Journalism, at least in a roundabout way. If nothing else, the chaos of this de-funded news environment might allow the scales to fall from journalists’ eyes, and to imagine a set of ethics afresh, one that doesn’t simply echo the principles of media owners.

Already some news organizations are trying to crawl out of the quagmire. Phillips cites the example of the Guardian, where editors have decided to run Press Association stories with their original bylines, rather than have a Guardian staffer rewrite those articles unless they can add some original reporting or insight to it. “This doesn’t sound very radical,” Phillips acknowledges, “but if all news organisations worked this way, they would have more time produce original stories and that would result in an expansion of the news pool.” Again, we find some potential for wiser, more ethical practice buried in the reality of the economics. Rather than dedicating scarce resources to primping news that has already been reported and written, media organizations can aim simply to replicate it frictionlessly, give due credit, pay a small toll for the privilege and chase a story that has not already been covered.

Mostly, though, this broke new world offers peril over promise.  Most of the industry can no longer ask the relatively benign question of how to fund the content we create. With money scarce, we’re forced to ask what content generates funds. The answer, too often, is junk.

To the dichotomy that Phillips and Witschge establish: the business side and the editorial side are merely the two avatars of the media’s dual purposes of commercial engines and public service. To label his paper’s Washington bureau “overhead,” as Sam Zell once did, is to misidentify that balance. Journalism doesn’t happen without ad dollars, but nor do the ad dollars flow without something of value to generate them.

The survey of “Changing Journalism” looked at the fraught period of 2007-2010, and the latest number it cites for the ratio of American advertising online to newspaper advertising is approximately 1 to 12 ($3.1 billion to $37.8 billion). The migration to an area of low advertising revenue from a high one is a bloodletting for American newspapers. The cruel physics of search engines, which prioritize the biggest and loudest sites, rather than the most accurate or even the swiftest sites, further dulls the incentive to rise to traditional journalistic standards. A 2010 Pew study found that only two of every ten new media stories contained any new information. The lack of outlets employing “the toilers in the field,” as Lee-Wright memorably describes reporters, means the key figures in putting out the paper or the newscast each day are those who sift through the digital morass and duplicate what they find there.

“Now, highly trained individuals find themselves virtually chained to their desks, not free to go out and source original stories because of the growing demands of productivity, and fearful if they did there would be no desk or job to return to.”

The copious layoffs — 24,500 job losses in print and 8,300 in broadcast in the United States between just September 2008 and September 2009 — has obliterated not only morale but the culture of newsrooms. Lee-Wright quotes a newspaper editor who says the loss of mentoring “is one of the less well remarked declines in the intellectual capital of journalism.”

There are no adults at the helm. Those workers still employed in corporate news organizations must accept their disposability; even quailing quiescence to the company’s wishes are no guarantee they will remain employed. Once a hallmark of a journalist’s professional identity, autonomy — a sense of controlling one’s own fate, as well as that of the small slice of reality represented beneath a byline — has been replaced by drudgery, and the knowledge that if they don’t play by the company rules, they can instantly be shoved off the parapet into the blogging mob just beyond the walls, churning out journalism-like content and atomizing the audience all the further as they strain to be heard.

If nothing else, “Changing Journalism” feels like an extended obituary, or perhaps doomed biography, of an industry caught between its own greed, the forces of history and a technological sea change that it was too slow to comprehend. The panicked response to these forces has been to send once-specialized editors and reporters to half-learn new skills (this book excoriates half-measures into video) while half-accomplishing the duties they were trained for. Lee-Wright and Phillips ask in one chapter “not what is possible for journalists to do, but what is useful for them to do.” All too often, they find, journalists’ assignments align with neither.

The demands to physically produce vast volumes of news, in the thinnest definition of that word, forces journalists to act more robotically, to appropriate others’ work in a fashion most any high school teacher would label plagiarism, to work extended shifts, to remain tethered via email and text to the relentless news machine, to grind audience-submitted content into a fungible hash that can be fed back to those same readers with camera phones. Those readers and viewers thereby feel they’re participating in journalism — and thereby supporting democracy — when often they’re just being led back to their own tails. Yet in at least one sense, the audience has genuinely usurped the journalists’ traditional role. Social media, Digg and other platforms for sharing have given the audience the power to decide what’s most important. The journalist’s agency is in tatters.

“Ethical behaviour relies on the individual feeling able to act well of their own accord,” Phillips writes. “In this atmosphere there is little room for acting autonomously.” Her solutions are seemingly simple enough. “Space and time, accuracy and sincerity — these are the things that will reconnect journalism with its audience and rebuild the trust that has been lost,” she writes. While it sounds unpalatable to North Americans, the authors’ advocate most strongly for adopting a model similar to some northern European countries in which the governments subsidize newspapers. In Sweden, for instance, “where the second newspaper in every town is subsidized,” newspaper circulations actually increased between 2000 and 2006. The option, as the authors see it, may be between public subsidy and a “complete collapse of a diverse and relatively unfettered news media.”

Ultimately “Changing Journalism” can’t offer much in the way of solutions; a companion volume (“Fixing Journalism,” perhaps?) would be nice, but if anyone had those remedies, they’d be in place already. Intuitively we know many of the problems laid out here. Reading them articulated so cleanly and clearly, though, is either grossly discouraging, or a welcome acknowledgment of how much work there is to be done now.