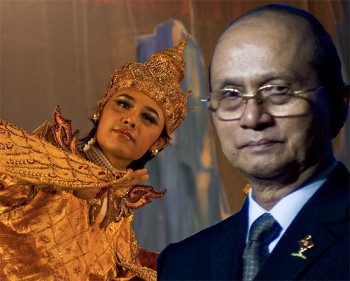 President Thein Sein of Burma, who usually wears suits, had his head put on the body of a traditional Burmese dancer. Note: Portrait photo of the Burmese president on right; an image of traditional dancer is on the left. (Credit: Nguyen Thanh Long from Sai Gon, Viet Nam and Thai Government via Wikipedia)

“We are trying to promote ethics among journalists, so I am upset by this,”  Ko Ko, the editor of The Yangon Times, told Irrawaddy, an independent news site, after The Right Time weekly published a Photoshopped image of the country’s president, Thein Sein.

Ko Ko added that he was worried the photo doctoring could affect Burmese media’s ability to maintain press freedom.

Bumese independent news site Irrawaddy reported that the doctored photo showed the president in “traditional Burmese dancing garb.”  It was “juxtaposed with a historical reference to Burma’s fraught inter-ethnic relations,” according to Irrawaddy.

See below the image.

See above the doctored photo that caused all the controversy. (Credit: Right Time, via Irrawaddy, screenshot)

Shawn Crispin, the Committee to Protect Journalism’s Senior Southeast Asia Representative who is based in Bangkok, explained to iMediaEthics by e-mail the cultural context for the outrage. The perception is that the Photoshop mocked the president. Crispin wrote:

And Burmese press council member Ko Ko highlighted concerns that the doctored image was both a media ethics fail and a press freedom issue, Irrawaddy reported.

But, Irrawaddy quoted Crispin in its report that he didn’t see what the big deal was.  “In countries with genuine press freedom, portraying national leaders in traditional dress or other out of the ordinary wares is par for the editorial course. Burma’s leaders need to be more open to criticism and less prickly about their portrayals in the press,” he said.

iMediaEthics asked Crispin to explain further how such altering of photos could affect press freedom in Burma.

“Authorities accustomed to the old censorship regime are still very thin-skinned to media criticism, including their pictorial portrayals in the press,” Crispin wrote.

“There is a risk that a publication is perceived to have crossed an undefined ‘ethical’ line and is singled out for prosecution as a warning to other publications.”

As an earlier report from Irrawaddy explained, under Sein’s reformist government, “draconian media restrictions” have relaxed.

iMediaEthics has written to The Right Time for more information regarding this incident, including if the photo was labeled a composite (the image above isn’t in English). We have also written to Ko Ko at the Yangon Times asking for more information about the controversy and the press council’s work. We’ll update with any response.