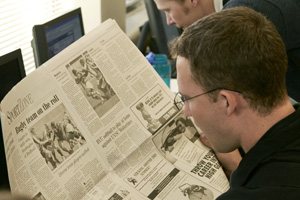 Donald W. Meyers, Salt Lake Tribune, reports that the typo on the front page of Brigham Young University’s The Daily Universe, was a disaster.   Staffers spent Monday recalling all 18,500 copies of the paper in order to quickly reprint them and to add an apology.

The flawed caption said (emphasis mine) , “Members of the Quorum of the Twelve Apostates and other general authorities raise their hands in a sustaining vote Saturday morning. …”

Don’t run to the dictionary if you don’t already know the word’s meaning. Dictionary.com defines “Apostates” as: n. “One who has abandoned one’s religious faith, a political party, one’s principles, or a cause;” whereas, “Apostles” are n. “Any of the early followers of Jesus who carried the Christian message into the world.”

In other words, prominent leaders of the Mormon community (aka LDS, or The Church of Jesus Christ of Latter-day Saints) were publicly saddled by the student paper with the “worst possible” label that amounted to a serious accusation.

A subsequent investigation by the paper management revealed that it was not an intentional error. Meyers wrote: “It started when a student misspelled the word ‘apostle’ when writing the photo caption. When the caption was put through the editing software’s spell checker, it was flagged, and the editor accidentally clicked the first word that came up on the correct list: ‘apostate.’ The mistake made it past two proofreaders before being sent off to the printing press.”

Meyers showed kindness to the students that erred by ending his article with a confession–that his paper recently made a similar mistake involving the LDS Church. He wrote: “Last week, The Salt Lake Tribune misidentified LDS Church President Thomas S. Monson in a headline. It identified the LDS leader as ‘Gordon Monson,’ the same name as a Tribune sports columnist.”

Regret The Error gives more details, including link to the newspaper’s apology and an article that explained how the gaff happened.