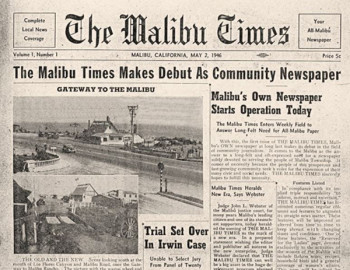 Image of first edition of Malibu Times via Pepperdine University

The Malibu Times published a hoax letter to the editor that criticized a local advocacy group, a retraction on its website admits.

The letter, “Some Praise” by “The Regan Family,” was published in the Aug. 14 edition of the weekly newspaper. The letter criticized Malibu Unites for having “taken cheap shots at you and your team” and “using our collective and genuine concern for safety as a wedge issue to promote their own agenda — the separation of Malibu schools from the Santa Monica School District.”

Malibu Unites’ Jennifer deNicola confirmed that the family didn’t write the letter. She told iMediaEthics by phone that the family “reached out to us immediately” to say they didn’t write and weren’t affiliated with the letter. deNicola pointed out that since the Malibu Times is a published weekly, the damage lasted the entire week the print edition was in circulation.

Malibu Unites is “disappointed to learn of this situation and that our local paper did not fact check this properly when this is such an important issue in our time that affects the health of children and teachers,” de Nicola said.

The Malibu Times is a local weekly newspaper in Malibu, California. It distributes “approximately 12,000 papers a week,” according to its website. It is “the legally adjudicated newspaper for the County of Los Angeles Judicial District” and the “official newspaper for all City of Malibu legal notices.”

The newspaper’s editoral board apologized in an Aug. 15 statement on its website.

“In days following its publishing, we’ve learned that the letter was a hoax and submitted by a false account. We apologize to the community and to Jolynn and Tim Regan for any misunderstanding or hardship this caused.”

iMediaEthics found the now-retracted letter via a Bing Cache.

In a note atop the letter, the Malibu Times said the letter had been sent to the Board of Santa Monica-Malibu Unified School District as well.

Malibu Unites identifies itself as working toward “ensuring a healthy school environment for all children in all schools and the teachers who educate them.” The organization claims, “We are facing an environmental issue at the Malibu schools that dates back to the summer of 2010.”

See the letter in full below.

iMediaEthics notes that the print edition of the Malibu Times states the newspaper has verification practices for letters. See below:

iMediaEthics has written to the Malibu Times to ask how the newspaper learned it was hoaxed and what its verification practices are for letters submitted by readers. We’ve also left messages with the Regan family for comment.