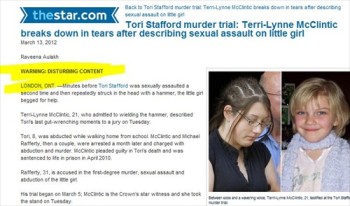 The Toronto Star flagged some of its reports on the trial for the murder of Tori Stafford with warnings about the content. See above highlighted warning. (Credit: Toronto Star, screenshot)

Stafford “vanished” in April 2009 and police found her “remains” in July 2009.  In May 2009, police charged Michael Thomas Rafferty and girlfriend Terri-Lynne McClinctic “with kidnapping and murder,” The Globe and Mail reported.  McClintic pleaded guilty in April 2010 to child abduction and first-degree murder. Rafferty is being tried on charges of “first degree murder, sexual assault causing bodily harm and abduction,” according to CBC.

As English explained, the general reader response to the coverage has been “Please don’t print any more.”  Specifically, readers were upset over this March 14 article reporting on Terri-Lynne McClintic’s March 13th testimony, “the first time the public had an opportunity to hear her numbing account of Tori’s killing.” News radio 570 News reported similarly, that readers were concerned about the detailed graphic reporting.  “The stories aired here on 570 News came with warnings of graphic content, allowing people to turn down their radio if they’d rather not hear it,” according to 57 News reported.

As the Toronto Star’s Rosie DiManno wrote in her article of the testimony:

“It is a wrenching narrative that can’t be told with dignity for the victim or sensitivity for her parents, both of whom listened with expressions of horror and excruciating pain.”

DiManno explained to English the detail of her reporting of this trial, which she called “the worst trial she has ever covered.”  DiManno said:

“My view has always been that, if the victim had to endure the horror, the least we can do is not look away. Newspapers shouldn’t act as a buffer between readers and reality.”

Further, DiManno said to English that Tori’s family “has expressed no dismay with the coverage.”

English noted that some of the “even more gruesome details of Tori’s rape and murder” were withheld and that DiManno’s column carried a red “warning ” in print that read  “This article contains graphic and disturbing content.”  The online article also carries a warning as does this March 13 report.

According to English, the Toronto Star decided against “live tweeting from the trial because city editor Graham Parley believes editorial oversight is important here.”

The Globe and Mail’s public editor, Sylvia Stead, also weighed in on how the newspaper “is covering the Stafford trial” a week earlier. Stead published a Q & A with Globe and Mail national editor Sinclair Stewart about the newspaper’s coverage.  Stewart explained that the newspaper has two reporters at the trial so one can handle immediate, live reporting.

Executive director of the Organization of News Ombudsmen, Jeffrey Dvorkin, blogged March 15 arguing that some of the reporting in the case serves as “another example of news pornography.”  He used the attention to reporting on this case as a way to call for “better – not more – crime reporting” and for more training on crime reporting.    According to Dvorkin, crime reporting can be “so uncritical and without much context” or “skepticism.”  Further, Dvorkin said “Journalists are overly dependent on police and legal sources and happy to be limited in that way.”