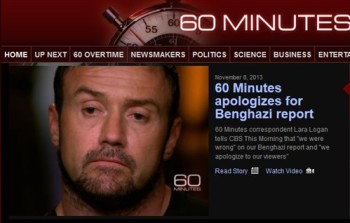 As iMediaEthics wrote Friday, CBS News’ 60 Minutes correspondent Lara Logan apologized and admitted the program was “misled” by source Dylan Davies, who said he was at the compound during the Benghazi attack in 2012. However the Washington Post and Daily Beast found Davies’ incident report, which said he wasn’t there at the attack. Davies said the incident report was fake, but later, the New York Times added that Davies also had told the FBI he wasn’t at the compound, prompting CBS News’ Logan’s admission that the report was “wrong.”

Fager, who is also the executive producer of 60 Minutes, said Davies intentionally lied to its reporters. “Everyone in the news business knows that you can make a mistake, and there are people out there looking to deceive reporters,” Fager told Variety. “In this case, he was a very good one.”

Fager said “the most important thing now is that we own” the error. However, Variety reported that he wouldn’t say “how CBS News might review the journalistic procedures that led to the mistake in the “60 Minutes” report” or if there would be disciplinary action.

Meanwhile, the source Dylan Davies’ book, The Embassy House, has now been “withdrawn from publication and sale,” Media Matters reported.

A statement from the book’s publisher, Threshold Editions, reads:

“In light of information that has been brought to our attention since the initial publication of THE EMBASSY HOUSE, we have withdrawn from publication and sale all formats of this book, and are recommending that booksellers do the same. We also are notifying accounts that they may return the book to us.”

Earlier this week, Logan said to the New York Times that it was “a mistake” and an “oversight” to not disclose that Davies’ book publisher was owned by CBS. On its website, Threshold Editions describes itself as an imprint “that specializes in conservative non-fiction.”

Progressive media watchdog Media Matters created a timeline of events between CBS’s airing the report and today’s apology, as did Poynter.