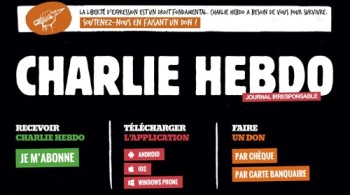 Kenya’s The Nairobi Star apologized after “Many Muslim readers complained” over its publication of the latest cover photo of Charlie Hebdo magazine.

The Star published the cover image, a cartoon of Muhammad, on its 23rd page. The Associated Press noted that the Star is “Kenya’s third largest newspaper.”

The apology, via Mediaite, states: “Yesterday, on page 23, The Star published a small reproduction of Charlie Hebdo‘s latest cover depicting the Prophet Muhammad saying ‘All is Forgiven.’ It was published in the context of  coverage of the international events following the attack on the Paris newspaper.

“Many Muslim readers complained. The Star sincerely regrets any offence and pain caused by the picture and we will bear Muslim sensibilities in mind in future.”

iMediaEthics wrote to former Star public editor Karen Rothmyer for her perspective on the Star‘s handling of the cartoon. Rothmyer said she wasn’t in Kenya or in touch with the paper’s staff at the time.

Toronto Star public editor Kathy English stood by the Star‘s decision against publishing the cartoons from Charlie Hebdo. In a Jan. 15 column, English argued that “clear decision had to be made and I believe the Star made the right choice. In facing a clash of two important, long-held values, I am glad the Star placed human values above strict news values and gave greater weight to the Star’s standard of respect for all people in its community, whatever their religion, race or sexual orientation.”

She added, “This judgment call caused no real harm to anyone. If you wish to see the cartoons you can.”

Unlike New York Times public editor Margaret Sullivan, who argued the Times should have published the latest cartoon because of its newsworthiness so readers don’t have to track the cartoons down on their own, English argued, “Their very newsworthiness means they are easily available to anyone who chooses to look for them online.”

She also pointed to the Star‘s publisher John Cruickshank and his comments on CBC Radio that publshing the cartoons would likely offend “a signfiicant portion of this population.”
Sky News Apologizes for Guest Showing Cartoon on Air

See the interview below.

Fourest criticized the UK news for not showing the cartoon.

Then when she picked up the magazine, the camera cut away and back to the news desk where the presenter apologized, saying:

“We’ve chosen not to show that cover so we would appreciate Caroline not showing that. I do apologize for any of our viewers who may have been offended by that. As you know here at Sky News, we’ve taken the editorial decision not to feature the cover of Charlie Hebdo.”

A Sky News spokesperson told iMediaEthics by e-mail that the network told Fourest it wouldn’t be showing the images so when she did try to show them, they had to end the interview. The full statement from Sky:

“Sky News has given extensive coverage to this story and to the highly controversial issues surrounding it, which have been debated on TV and across our other platforms on numerous occasions over the last few days.

“As with any controversial story, the issue of publication of the cartoons has been subject to rigorous editorial scrutiny and discussions – which will continue.

“Currently, Sky News is not broadcasting these images on any of its platforms. We informed Catherine Fourest of our stance before last night’s interview. She took the decision to show the front cover of Charlie Hebdo, and at that point Sky News made the decision to bring the interview to an end. ”