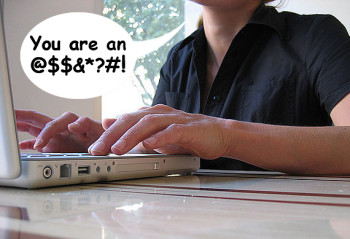 Chicago Sun-Times wants you to mind your p's and q's. (Credit: Illustration by London Shearer Allen. Photo by Sascha Pohflepp via Flickr)

The Chicago Sun-Times is fed up with their commenters’ behavior, which the editors describe without varnish as often “a morass of negativity, racism [and] hate speech” and “an embarrassing mishmash of fringe ranting and ill-informed, shrill bomb-throwing.”

Bottom line: Managing editor Craig Newman, according to an April 12 announcement, is “temporarily” not allowing online commenting on its articles. There wasn’t any specific incident that led to the decision, just “lots of general qualitative issues,” he told iMediaEthics.

“Hate speech, inaccuracies, political screeds and inappropriate nonsense have all been an issue – hardly just our problem as almost any newsroom editor will tell you,” he wrote by e-mail.

Newman’s announcement explained that the Sun-Times “and other titles in the Sun-Times Media group” will not allow online comments until the company can create a new, better commenting system.  He wrote:

“The world of Internet commenting offers a marvelous opportunity for discussion and the exchange of ideas. But as anyone who has ever ventured into a comment thread can attest, these forums too often turn into a morass of negativity, racism, hate speech and general trollish behaviors that detract from the content. In fact, the general tone and demeanor is one of the chief criticisms we hear in regard to the usability and quality of our websites and articles.”

Newman noted that they aren’t getting rid of comments but want to review how the system works. “We do want to take some time and work on the qualitative aspect of how they are handled and how we can foster a productive discussion rather than an embarrassing mishmash of fringe ranting and ill-informed, shrill bomb-throwing,” he wrote.

Newman told iMediaEthics by e-mail that there isn’t a “hard timeline on when commenting will be rolled out” since the Sun-Times is trying to create a solution for the commenting problems.

“It’s not as simple as just moderating the worst offenders, unfortunately,” he e-mailed iMediaEthics. “That’s part of it, of course. But figuring out how to develop more of a responsible community environment is really the goal. We want our comment fields to be as valuable and  useful as our reported articles – not just a spot for people to spew invective.”

Other Sun-Times Media publications include The Beacon News, Evanston Review, Chicago Reader and the Deerfield Review. Check the full list on the Sun Times website.