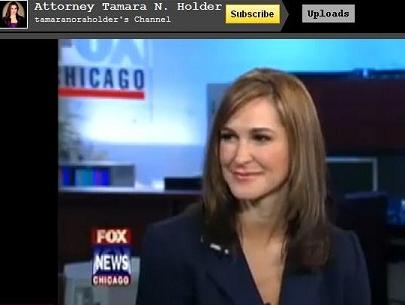 Tamara Holder, pictured here in this screenshot from a YouTube video, was called out for not disclosing her relationship to Rev. Jesse Jackson when blogging about Jackson's son.

Journalists should be careful to always disclose unavoidable conflicts of interest when reporting.  But does this principle apply to the blogosphere as well?

Holder had written a blog post for The Huffington Post June 9 titled “The Blagojevich trial begins – so should the clearing of Congressman Jesse Jackson, Jr.’s name.”

The blog post, written in the first person, describes Holder’s perspective on the “opening statements in the public corruption case against former Illinois Governor Rod Blagojevich and his brother, Robert.”

Sachdev reported from Holder’s biography that “Holder created a legal clinic in 2006 at Jackson’s Rainbow PUSH Coalition headquarters in Chicago” and that the clinic was to “generate clients for her law practice.”

Sachdev reported that Poynter’s ethics expert, Kelly McBride, said that because of Holder’s relationship with the Rev. Jackson, Holder has a conflict of interest if she writes about the younger Jackson.  Sachdev also noted that “bloggers who are not journalists are generally not held to the same ethical standards as journalists.”

So, should Holder have to disclose then? After all, she was clearly blogging her opinions.

“To me, since Reverend Jackson has nothing to do with the Blagojevich case, I simply didn’t think the disclosure was needed. If it was needed, I would have had no problem saying so. I also assumed that since my Huffington Post bio clearly states my work with his father, I would never be accused of not being totally transparent,” Holder wrote.

Holder wrote that when it comes to Congressman Jackson, she has no “personal relationship with him and that she has “never, not once, worked with Congressman Jackson on a single issue” and that although they both have board positions with an organization, they haven’t both been in attendance at any meetings.

Holder wrote that she updated her original post to include a disclosure and that she has not in the past or now had a problem giving disclosure.

“I am not a ‘reporter’ — I am an attorney, a legal analyst and a Contributor for FOX News Channel,” Holder wrote.  “I do not have to be fair or balanced so long as I can articulate my position with a strong argument. You do not have to agree with any of my positions.”

Sachdev wrote that Huffington Post spokesperson Mario Ruiz said that the site’s bloggers have to disclose financial conflicts of interest in writing, but that “Holder did not violate the blog’s ethical standards because her ties to the Rev. Jackson are disclosed in her online biography, which is linked to her Huffington Post blog.”

But, Sachdev reported that McBride said that “a link to Holder’s biography is not transparent enough.”

Blogger Pat Hickey wrote June15 that Sachdev’s article was a “smear” of Holder. Hickey wrote that he suspects Sachdev reported on the conflict of interest because his boss told him to.

In Holder’s biography on her blog SquareSpace page, her business Web site, and on her Huffington Post “full” biography page, Holder discloses her relationship with Rev. Jackson.  The biography includes the following text:

“Tamara also works closely with Rev. Jackson in crafting and executing public policy initiatives, together with programs to increase opportunities for minorities and the economically disadvantaged; as well as initiatives designed to get guns off the nation’s streets, help reduce street gang violence, and offer educational opportunities for young people. As a result of her work, she quickly caught the attention of not only Chicago’s civic leaders, but also of those nationwide.

“Tamara’s desire to help the economically disadvantaged and indigent led her to create a pro bono expungement clinic at Rev. Jesse L. Jackson’s Rainbow Push headquarters where she provides free legal advice and educates the public about the importance of clearing their criminal background.

“Tamara has met privately with Illinois Governor Patrick Quinn and former Illinois Governor Rod Blagojevich on the issue of pardons and IL Attorney General Lisa Madigan on criminal sentencing and expungement laws. She has worked with many of the nation’s top political leaders, such as Congressmen John Conyers [D-MI] and Bennie Thompson [D-MS], to name a few. “

Hickey also blogged June 17 and posted a scan of the print newspaper version of The Chicago Tribune’s story on Holder’s disclosure of her relationship to Jackson.  In the headline, the newspaper misspelled Jesse Jackson’s name as “Jessie Jackson.”

The Society of Professional Journalists’ code of ethics advises that journalists “avoid conflicts of interest, real or perceived,” “remain free of associations and activities that may compromise integrity or damage credibility,” and “disclose unavoidable conflicts.”