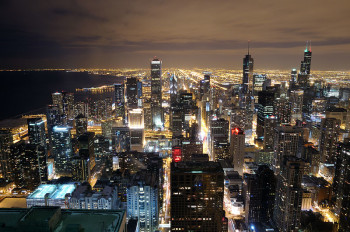 “Envy isn’t a rational response to the upcoming 10-year anniversary of Hurricane Katrina,” she wrote. “But with Aug. 29 fast approaching and New Orleans Mayor Mitch Landrieu making media rounds, including at the Tribune Editorial Board, I find myself wishing for a storm in Chicago — an unpredictable, haughty, devastating swirl of fury. A dramatic levee break. Geysers bursting through manhole covers. A sleeping city, forced onto the rooftops.

“That’s what it took to hit the reset button in New Orleans. Chaos. Tragedy. Heartbreak.”

Her editorial was originally titled “In Chicago, Wishing for a Hurricane Katrina,” but the headline has been changed to “Chicago, New Orleans and rebirth.” In addition, there were other changes to the editorial, the Huffington Post reported. (The Huffington Post uploaded a PDF of the original article here.)

“That’s why I find myself praying for a real storm. It’s why I can relate, metaphorically, to the residents of New Orleans climbing onto their rooftops and begging for help and waving their arms and lurching toward rescue helicopters.”

“That’s why I find myself praying for a storm. OK, a figurative storm, something that will prompt a rebirth in Chicago. I can relate, metaphorically, to the residents of New Orleans climbing onto their rooftops and begging for help and waving their arms and lurching toward rescue helicopters.”

After blowback from readers, McQueary wrote a follow-up column the next day, Aug. 14. “When I wrote a column Thursday about Hurricane Katrina, and how I wished Chicago could face a similar storm — to be jolted in a new direction — I offended the entire city of New Orleans and beyond,” McQueary wrote.

She argued her column “used the hurricane as a metaphor for  the urgent and dramatic change needed in Chicago” and not “out of lack of empathy, or racism, but out of long-standing frustration with Chicago’s poorly managed finances.”

McQueary pointed to New Orleans Mayor Mitch Landrieu’s recent meeting with the Tribune’s editorial board in which he discussed re-booting the city to handle its problems instead of re-instating old problems.

“Many readers thought my premise — through my use of metaphor and hyperbole — was out of line,” McQueary admitted. “I certainly hear you. I am reading your tweets and emails. And I am horrified and sickened at how that column was read to mean I would be gunning for actual death and destruction.”

She added, “Chicago needs urgent, revolutionary change. We can’t keep borrowing our way into bankruptcy. That’s what was in my heart.”

The Clarion-Ledger’s executive editor Sam R. Hall noted of McQueary’s follow-up column: “The follow-up sounds similar to an apology, but it falls short of actually apologizing — except for how her dear readers interpreted what she wrote.”