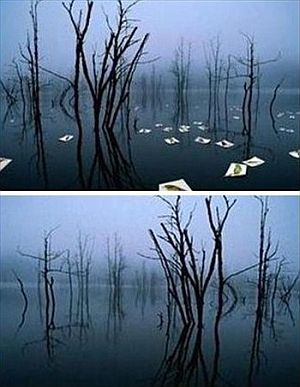 Hou Xie's "Tomorrow's Reality" (pictured on top) lost an art award. The fake photo is a reversed and slightly altered version of a stock photo from a Chinese photography book (pictured on bottom. (Credit: China.org.cn)

iMediaEthics wrote last August about Hou Xie’s photo “Tomorrow’s Reality.”  The photo was submitted to a photo contest, awarded a top prize, and published in Chinese magazine “Chinese Photography” — all before the photo was outed as a phony image.  The image reportedly is an altered version of a stock photo.

But, the photo fakery isn’t over. The Chinese National Photographic Art Exhibition recently revoked the 2010 award to Hou for the photo, Pop Photo reported. PopPhoto questioned if Hou’s image could be argued as “transformative” though, since Hou says the photo was submitted in a category that permitted Photoshopping.

“Should adding floating pictures of birds gotten this picture, which significantly changes the message of the photography, be considered enough of a transformation that it’s no longer considered plagiarism?” Pop Photo wondered.