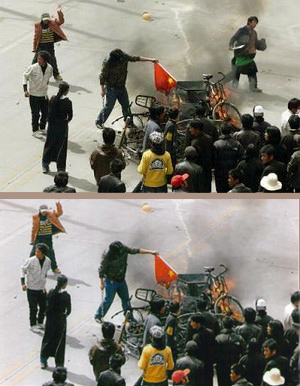 Levant writes,"It's easy to spot the difference, when the two are juxtaposed: the knife-wielding fellow in the top right has been photoshopped out of the second photo."The Epoch Times explained that the "protestor" was a policeman who played part of 'rioter' in the staged government "riot." They said,"The man with the knife [is] now missing...after the man's identity was revealed at a rally in Darmasala."

“According to this story in the Epoch Times, it’s because that “Tibetan rioter” was not Tibetan at all, but rather a Chinese policeman dressed up as an ethnic Tibetan, sent out to wave a machete and generally look menacing. It’s part of the Communist strategy to paint peaceful Tibetans as the violent brutes. It’s the same reason the comical Chinese ambassador to Canada compared the pacifist Dalai Lama to the Nazis.

“But the Chinese didn’t count on one of their agents provocateurs being recognized — so they hastily changed history by handing out a new photo.”