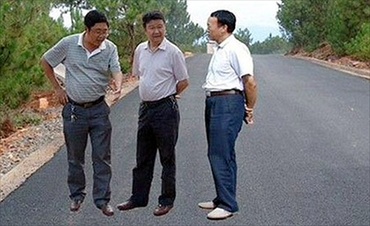 A Chinese government has admitted this photo is Photoshopped. (Credit: Atlantic Wire/China Daily)

A Chinese county government has apologized for releasing a doctored and staged photo, China Daily reported.

According to China Daily, the three Huili county government officials pictured have been photoshopped into an image of a highway.  The government has apologized for the photo, which was “widely distributed,” via a “micro-blog” in which the government claims the picture was released “out of error.”

The photographer explained that “he combined some pictures taken on the day of the inspection because the original shots were not good,” China Daily reported.

Yahoo News questioned if the photo is “one of the worst doctored photographs.”  The photo was published on the Huili county government’s website.  Huili county is in China’s Sichuan province.

Interestingly, a netizen from Sichuan province exposed the famous 2007 Chinese fauxtograph of an endangered tiger, StinkyJournalism notes. That fauxtograph, produced by Zhou Zhenglong, was endorsed by Chinese officials until Zhou’s photo was revealed as a phony.  Zhou, however, maintains that the photo is real and was recently jailed for violating parole in a search for the tiger.

Since the floating government officials fauxtograph was outed as doctored, “internet users” have parodied the images, The Wall Street Journal noted.

Parodies include placing the three officials in a photo of a soccer match, alongside dinosaurs and the infamous Situation Room photo.  See here a selection of the fauxtograph fun.

An interesting selection placed the three officials in the now famous “Situation Room” photo taken in May during the mission against Osama bin Laden.  As iMediaEthics reported, that photo was doctored by two Hasidic news outlets to remove the two women pictured in the photo — Hillary Clinton and Audrey Tomason. iMediaEthics wonders if that Photoshop subtraction of the two women was in mind during the Photoshop addition of the three men.