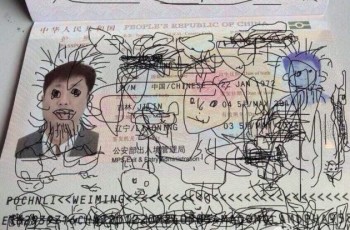 The photo used as evidence of the passport doodling story. (Via Kotaku)

It’s official. That story about a Chinese man being stuck in Seoul, South Korea because his son drew all over his passport is bogus.

The Wall Street Journal reported June 5 that the Chinese Embassy in Seoul confirmed there were no cases of that happening in South Korea.

“An official at the Chinese Embassy in Seoul told Korea Real Time the photo was a hoax and the South Korean immigration service hadn’t prevented anyone traveling because of child’s play on official travel documents,” the Journal reported.

Likewise, “state-level news agency” China News Service reported that “The Consular Section of the Chinese Embassy in South Korea said no request for help has been received. If something like that happened, the embassy could issue a new passport.”

The original story claimed that a Chinese man was unable to return home after his son defaced his passport.  As evidence, a photo of his marked up passport was posted alongside stories.

Signs the Story was Bogus

Brian Ashcraft, writing for Gawker-owned gaming news website Kotaku, analyzed the drawings that the child allegedly made on the passport and pointed out that most “four-year-olds don’t draw that well.”

“I have a difficult time believing that a four-year old’s motor skills would be up to snuff, unless the child was advanced for his or her age.”

Mediaite pointed to the lack of details in the story: “You know a story is done well when it doesn’t even have the subject’s full name included, or the time frame of the events, and its source is essentially a Chinese Facebook post by a random dude.”

Who Reported on the Story?

A whole ton of news outlets reported on the passport story as if it were real.

Below are a few of the stories iMediaEthics tracked down.

The UK Telegraph noted in its story that there had been “scrutiny on social media and elsewhere” suggesting the photo may be bogus.

The Huffington Post has since posted an update on its June 2 story acknowledging the story may be fake. The update reads:

“UPDATE: 12:09 p.m. – Several media outlets have raised questions about the authenticity of the passport story. The Huffington Post will update the post as more information becomes available.”

USA Today published a June 5 story about the passport claim but posted “Corrections and clarifications” admitting the story was a hoax. The statement reads:

“Corrections and clarifications: The original version of this story stated a Chinese man was stuck in South Korea because his son had made drawings on his passport. A story update included speculation that the photo was fake, which later was confirmed by The Wall Street Journal, citing an official from the Chinese embassy in Seoul.”

iMediaEthics has written to the Chinese Embassy in Seoul for further comment.