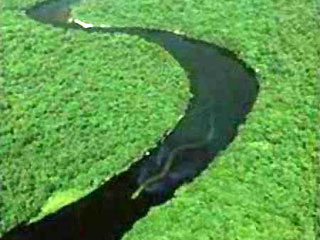 Here is one of two fake photos of a giant snake recently circulating on the web. People have learned that "too good to be true" photos found in their email in-boxes sent from friends or in the pages of mainstream media outlets or blogs may be photoshopped or staged. Fortunately citizens have learned that skepticism is a sound daily tool used by savvy media consumers.

The most recent extreme scary animal photos published by bloggers and mainstream media was almost instantly identified as a hoax in a FOX News headline. Probably not coincidentally, these new fake images follow the early February 2009 well circulated announcement in the science journal Nature of a giant one ton snake fossil that was discovered in a coal mine in Columbia, South America.

By February 19-20, reports of a living one ton monster “suddenly” was observed in Borneo. Instead of completely playing along, FOX News immediately ran a Live Science report titled, “Why the Giant Snake is Fake.” However, the text of the article gives far too much room for belief masked as objectivity and balance.

The UK Daily Mail  tried, and failed, to give the story credibility by stating “Even the respected New Straits Times [NST] newspaper in Kuala Lumpur has asked readers to make up their own minds about the photos.” However, if you bother to go to NST (there is no link provided), you quickly see this Daily Mail statement misrepresented their report.

NST actually said that even the locals did not believe this giant river snake story that some linked to their old myths and legends. NST wrote, “This grainy picture of a large snake, carried by a Malay daily in Sarawak last week, got the 60,000-odd residents in Kapit all abuzz. However, most of them believed it to be a hoax.” NST said “one of the respected town elders” laughed saying, “It was rubbish.”

The handling of this latest hoax by the mainstream media is somewhat positive news. It shows some progress in both citizen’s visual sophistication and editors resistance to turning a blind eye to photos that are just too good to be true–but will reward them with huge web traffic.

Next step in this ladder of ethical progress, of course, is to not run these fake photos at all. In this case of the Borneo hoax, the first news stories included how and why the Giant Snake photos were likely phony. In the past, the doctored photo follow a media trajectory that stretches out the news cycle…and the web hits. The steps are: 1) Look what people found (only some bloggers have doubts); 2) Doubts are raising; 3) Many think photos fake (and here is a load of evidence) and finally: 4) It’s fake!

Unfortunately the last step, number 4. It’s fake, doesn’t get circulated as much as steps 1 and 2. Years go by and citizens and media outlets will roll out photos as “questionable” when, in fact, they were debunked long ago. StinkyJournalism.org is working on a longer report about this topic of media knowingly or irresponsibly publishing fake images … and how they try to hide it afterwards.