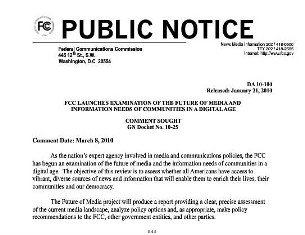 Amy Gahran writes that journalists need to get more involved as citizens. For starters, she recommended journalists comment on the FCC Future of the Media project.

Journalists typically try to avoid voicing their opinions on government policy, but journalist and media consultant Amy Gahran says that needs to change, at least when media issues are involved.

From the Federal Communications Commission’s call for comments on its Future of Media project to lobbying individual organizations and states, Gahran noted in her piece for Knight Digital Media Center various opportunities for journalists to get involved in changing policies and making organizations and governments more transparent to the media and public.

According to the FCC Web site, “the Future of Media project will produce a report providing a clear, precise assessment of the current media landscape, analyze policy options and, as appropriate, make policy recommendations to the FCC, other government entities, and other parties.”  The deadline for comments is May 7.

As the U.S. government is working to be more transparent, now may be the time for journalists to be vocal and participate in shaping policies, Gahran wrote. Will President Barack Obama cash out what he wrote in a memo to executive agencies on Jan. 21, 2009, regarding an Open Government Directive?

“If (journalists) don’t claim a leading role, we’ll be relegated to the background.  Ultimately, communities would pay the price for our reticence,” Gahran wrote.

Even though the Society of Professional Journalists’ code of ethics says that journalists should remain free of associations and activities that may compromise or damage credibility, active participation in policy debate can’t hurt journalists’ reputations or  credibility, Gahran wrote in an e-mail to StinkyJournalism.

“Being transparent does not absolve you of a responsibility for fairness, fact-checking, etc,” Gahran e-mailed StinkyJournalism. “You can be as transparent as you care to be and also perform ethical journalism at the same time. They’re not mutually exclusive. In fact, I think it’s getting pretty damn difficult to claim that the traditional journalistic practice of fostering the appearance of objectivity by deliberately withholding or concealing relevant info and context is ethical.”

Gahran referenced Robert Niles’s post on The Online Journalism Review and wrote that journalists and journalistic organizations must support policies that could improve journalism’s and, thus, the public’s interests.

Niles mentioned three examples where journalists can get involved in civic matters: